The Calder Trophy is one of the most intriguing awards in the NHL. Every year a new crop of rookies compete for the title of league’s best and with it a shining star at the start of their NHL careers. The list of winners includes many of the best players the game has ever seen—Terry Sawchuk, Frank Mahovlich, Bobby Orr, Ray Bourque, Mario Lemieux and Alex Ovechkin are all part of the exclusive group—but also has some names that haven’t had quite the careers their early success implied. 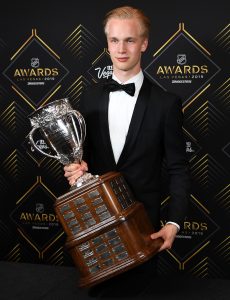 Last year’s winner was Elias Pettersson, who beat out Stanley Cup winner Jordan Binnington in voting after a 66-point season. Pettersson only played in 71 games making his point totals even more impressive and enough to eclipse the turnaround that Binnington provided the St. Louis Blues in the second half.

Could Vancouver have another winner on the roster this time around? Quinn Hughes is off to an incredible start with the Canucks in his first season, logging some of the best possession numbers in the NHL and posting ten points in 13 games. Hughes looks to have escaped major injury recently when his leg was twisted underneath him, but he’ll have to return soon if he has a chance at holding off the field.

In fact, he’s not even leading rookies in scoring this season. That honor is split between two very different players. Cale Makar, another outstanding young defenseman that showed what he could do in the playoffs last season has 11 points in 14 games. The Colorado Avalanche have loved every minute of their rookie phenom, and are giving him even more opportunity of late.

He’s tied with Ilya Mikheyev though, who has the advantage of several years of professional hockey under his belt. Mikheyev is already 25 years old, but is playing in his first NHL season after signing with the Toronto Maple Leafs out of the KHL. It’s not like the NHL hasn’t seen a situation like this play out before. Artemi Panarin beat out Connor McDavid in 2015-16 as a 24-year old rookie out of the KHL, though he needed a 77-point season and an injury to the Edmonton Oilers’ superstar to do it. Mikheyev would probably need some good fortune to come out on top, but 11 points in his first 15 games is nothing to ignore.

There are plenty of others to consider however. Victor Olofsson leads all rookies in goal scoring with six, all of which have been on the powerplay. If his even-strength contributions could catch up there’s a real chance he could lead all first year players in points by the end of the year. Jack Hughes has also been effective, even after an extremely slow start. He has the benefit of notoriety that comes with being the first overall pick, but he’ll likely need at least a bit of team success to take home the trophy.

Others like Martin Necas, Cody Glass and Alexander Nylander have all been given amazing opportunities playing with great NHL talent, while defenders like Ethan Bear and Dante Fabbro impress in their own end. Kaapo Kakko, who may have been expected to contend for it after his outstanding international performances, will need to really turn his early season struggles around in order to catch the clubhouse leaders.

Who do you think is the favorite right now? Who will eventually win? We’ve included some of the major candidates below, but make sure to suggest other possibilities in the comment section.