The Boston Bruins have reached extensions with two of their veteran forwards, signing Charlie Coyle for an additional six years and Chris Wagner for three. Coyle’s new contract will carry an average annual value of $5.25MM while Wagner’s carries an AAV of $1.35MM. Both players were scheduled to become unrestricted free agents after this season.

Coyle, 27, will now be under contract through the 2025-26 season and locked in as a core piece for the Bruins to build around. The versatile forward can play wing or center and adds a well-rounded game to the group, even if he did struggle offensively early this season. Lately, including last night at Montreal, Coyle has been able to support the team’s top unit by creating secondary scoring further down the lineup and adding another weapon on the powerplay. 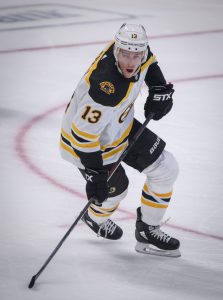 Acquired from the Minnesota Wild last season in exchange for Ryan Donato, Coyle was a huge part of the Bruins’ Stanley Cup run, scoring 16 points in 24 games and tying for the team lead with nine goals. Add that postseason success to the fact that Coyle is from Massachusetts and bleeds the black-and-gold and there was always a match to be made.

Wagner meanwhile has finally found a home with the Bruins after bouncing around the NHL through the early part of his career. The 28-year old played 76 games for Boston last season and recorded 12 goals and 19 points, but was an effective bottom-six option for the team. Another Massachusetts boy, his new deal keeps him under team control through the 2022-23 season for a more than reasonable price.

There’s risk in any signing the length of Coyle’s, but the Bruins have bought themselves wiggle room with other excellent deals in the past. Brad Marchand and David Pastrnak are legitimate contenders for the Hart Trophy this season and cost a combined $12.79MM against the cap, an incredible bargain in today’s NHL. Though they have other players needing new deals—namely star defenseman Torey Krug, who is scheduled for unrestricted free agency—these two new cap hits shouldn’t hinder their ability to sign whoever they want.

Ryan Whitney of the Spittin’ Chiclets podcast was first to report that the deals were close.