One of the greatest goaltenders in the history of the NHL is finally hanging up his pads (literally). Roberto Luongo took to Twitter to announce his retirement and detailed his decision in a long letter to fans of his, explaining that he would love to stay on as part of the Florida Panthers’ organization in some capacity:

…Once I’ve had some time to process this and make the adjustment, I’d love to be part of the Panthers organization. This is where my home is and I still love and want to be involved with hockey. At the end of the day, maybe I didn’t win the Stanley Cup on the ice, but perhaps I can still put my name on it in another way. It wouldn’t be quite the same, but it would still be quite the accomplishment. 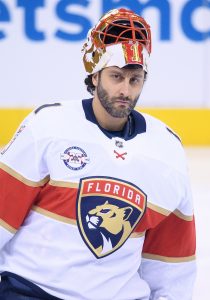 His retirement brings with it more than just a vacancy in the Panthers’ crease. Because of the structure of his contract and the fact that he is retiring before it is completed, both Florida and the Vancouver Canucks will face cap recapture penalties for the next several seasons. Though there is some dispute over the exact numbers, the most recent estimate from Frank Seravalli of TSN had the Canucks facing a $3.03MM penalty for each of the next three years, while the Panthers would face a $1.09MM penalty for the same duration. Luongo had three years left on his deal that carried a $5.33MM cap hit, though the Canucks were retaining $800K of that. The actual salary however was set to drop to just $3.62MM total over those three years, meaning he’s not giving up very much compared to the ~$93MM he has already earned in his career.

Regardless of the cap implications that his retirement causes, Luongo’s presence in the NHL will be sorely missed. The sarcastic, humble personality that he crafted through social media and interactions with fans made him well-liked across the entire league, even as he continued to put up incredible numbers. Third all-time in wins with 489, he will go down as one of the best goaltenders to never win a Stanley Cup or Vezina Trophy. His best chance at the latter may have been in 2004, when he recorded a .931 save percentage while appearing in 72 games for the Panthers. Unfortunately the team wasn’t able to help him and his 25-33-14 record cost him votes to the eventual winner, Martin Brodeur.

Or perhaps it was 2011 when Luongo led the league in wins with 38 and took home the Jennings trophy as the goaltender for the team who allowed the fewest goals. His .928 save percentage was a huge part of the success for the Canucks that season, though he would eventually watch Tim Thomas accept the award after an otherworldly season. Overall, Luongo finishes his career with a .919 save percentage across 1,044 regular season games.

Obviously it is impossible to see a hole appear in the Panthers net and not immediately speculate on who will fill it next season. While the team has James Reimer under contract they have explored trading him over the last few weeks, and are still being linked to free agent Sergei Bobrovsky. Though the cap recapture penalty is annoying, it actually may be better for a team with the cap space of the Panthers than trying to navigate the tricky long-term injured reserve waters. Bobrovsky reportedly met with the Panthers in recent days, but is also headed to New York to have some further meetings.