Just a few days ago there was a report that the Winnipeg Jets were now listening on offers for speedy forward Nikolaj Ehlers, and today more news came out about his potential future. Frank Seravalli of TSN writes that “the belief is” Ehlers has been offered to the Carolina Hurricanes in an attempt to pry free one of their right-handed defensemen. That kind of move makes sense given the Jets’ recent trade of Jacob Trouba and current hole on the right side of their defense. Tyler Myers, another part of what was once a huge strength for the Jets on the right, is scheduled to become an unrestricted free agent if Winnipeg can’t find a way to re-sign him. 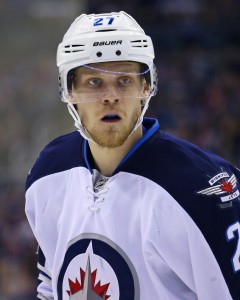 The Hurricanes do have an incredible amount of talent on the blue line and have been connected to almost every team in search of defensive help. Dougie Hamilton, Justin Faulk, Brett Pesce and Trevor van Riemsdyk make up an impressive group of right-handed options that could all be of interest around the league. The team also has youngsters Haydn Fleury and Jake Bean waiting in the wings for a full-time opportunity, though both are left-handed.

The Jets meanwhile aren’t looking just to improve their defense, but also find a way to navigate what will be a difficult cap situation. Patrik Laine and Kyle Connor both need new contracts that will take up a huge part of their remaining cap space, and they still need to find a way to improve the club after this season’s disappointing finish. Ehlers was a huge part of that disappointment, scoring just 37 points in 62 games in the first year of his seven-year, $42MM deal. The 23-year old forward was completely shutout in six playoff contests and now has failed to score a single postseason goal through 21 games.

Mathieu Perreault, who has long been included in Jets trade rumors, was also discussed by Seravalli. The TSN scribe notes that the Jets explored packaging the veteran forward along with Trouba, though that obviously didn’t materialize. Perreault has two years left on his current deal with a $4.125MM cap hit and scored just 30 points last season while playing in a greatly diminished role.