The Arizona Coyotes have acquired Carl Soderberg from the Colorado Avalanche in exchange for Kevin Connauton and a 2020 third-round pick. Coyotes’ GM John Chayka released a short statement on the acquisition:

Carl is a versatile, 200-foot player who has a history of being productive and playing tough minutes. He will be a stabilizer in our lineup and gives our coaching staff lots of flexibility. 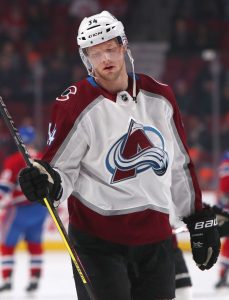 Soderberg, 33, had an excellent bounce-back season in 2018-19, recording 23 goals and 49 points while playing in all 82 games. That kind of production is exactly what the Avalanche expected when they signed him to a five-year, $23.75MM deal in the summer of 2015 but after a good initial season in Colorado he had fallen off a cliff offensively. In fact, during the 2016-17 campaign the Swedish center only recorded 14 points in 80 games and many called for the Avalanche to get rid of him through one way or another. Their waiting has paid off, as his entire $4.75MM cap hit will now be transferred to Arizona while receiving a quality depth defenseman and pick in return.

In Arizona though, Soderberg will be a veteran addition to a club trying to get over the hump and qualify for the playoffs. His versatility down the middle will help take some pressure off the other offensively gifted players on the Coyotes and add to what has now become something of a strength for the club. Just a few years ago the Coyotes were trying everyone they could at the center position in hopes of finding a quality option, but now have Soderberg, Derek Stepan, Nick Schmaltz and Brad Richardson who can be penciled in with Christian Dvorak and Alex Galchenyuk also having experience in the middle.

For Colorado though, this move seems to indicate something bigger is on the horizon. GM Joe Sakic spoke at the end of the year about being more aggressive in free agency, and with nearly $40MM in cap room he can basically go after any player he wants. A good chunk of that money is owed to the team’s own restricted free agents—most notably star winger Mikko Rantanen—but there is more than enough to go around in free agency. In fact, the team might even be able to clear more cap space if they are actually still considering moving Tyson Barrie in his final year. With the addition of Connauton, the Avalanche have seven NHL defensemen under contract with Nikita Zadorov a restricted free agent and Bowen Byram pushing for a spot after being selected fourth overall.