The Blue Jackets got a big boost from Dubois who should provide the team with a top center for quite a long time as the 20-year-old had a solid rookie campaign as he posted 20 goals and 48 points. Those numbers should exponentially increase as he gets older, bigger and more comfortable in the league. It wouldn’t be surprising at all to see him develop into a 60-70 point player this year already. And with two years remaining, he will continue to be a bargain for some time.

Werenski had a mixed bag of a season as he saw his points totals drop from his rookie season (47 points) to his second season (37 points). Yet his goal totals increased from his rookie season (10) to his sophomore season (16). However, Werenski underwent surgery for a shoulder injury that had been causing him pain since October, suggesting he played injured all season. A fully healthy Werenski could give the team one of the top young defensemen in the league.

Milano arrived with much fanfare, but he struggled finding a permanent place in the lineup, as he often received relatively few minutes on the third line due to his struggles on defense. However, Milano showed flashes of scoring ability as the 22-year-old posted 14 goals in 55 games. With a year under his belt, Milano might be able to take those numbers to a much bigger level if he can prove he can play a two-way game for coach John Tortorella. 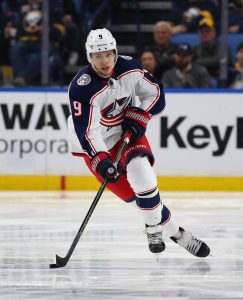 The biggest news all offseason is the fact that Panarin has told Columbus general manager Jarmo Kekalainen says he’s not ready to discuss an extension. Despite the GM’s attempt to speak to Panarin to convince him to stay, it looks like Panarin wants to head elsewhere once his contract expires at the end of the season and he becomes a unrestricted free agent. The 27-year-old winger posted a career-high 82 points after being acquired from the Chicago Blackhawks, but seems to be looking to play in a city with a more diverse market. While there have been rumors that Kekalainen has been looking into trading options, little has come from it. The team may opt to wait until the trade deadline, but that could also lessen the return.

Perhaps more concerning is the contract situation with Bobrovsky. The 30-year-old goaltender is also in the final year of his contract. While there is no talk of leaving Columbus, the Blue Jackets have to be somewhat concerned about the veteran goaltender’s asking price. He will be 32 years old when his next contract takes effect, but Bobrovsky wants term, the team could be paying him until he’s 40 years old and it’s extremely likely that the goalie will take less money than the $7.43MM he’s making on this contract. However, that’s a lot of money to be handing out to an aging goaltender. Bobrovsky’s numbers are still good as he posted a 2.42 GAA and an impressive .920 save percentage in 63 games. However, his struggles in the playoffs isn’t working for him either. Regardless, the team could find itself in quite the contract negotiations in the coming summer.

Duclair is another interesting player, who signed a one-year deal after disappointing in both Arizona and Chicago. The 22-year-old opted to sign a minimum “show me” contract to prove he belongs in the NHL, but he’s struggled to produce over the years after a successful season back in 2015-16 when he potted 20 goals. Since then, he’s managed to post just 16 goals in two seasons. If he can find his game in Columbus, the Blue Jackets could still retain him as he’s a restricted free agent.

With two years remaining on his deal, the team likes what it sees in Anderson, but still hopes to see even more offense. The 24-year-old did collect 19 goals this year, two more goals than his previous season and in 15 less games, so he’s improving. He also has managed to almost cut in half his penalty minutes. However, the team will need to see more offense if he wants to stay on after two years for any significant salary. Kukan, on the other hand, might be ready to take a full-time role with Columbus after the 25-year-old split time between Columbus and Cleveland of the AHL.

While many feel that Dubinsky still has some gas left in the tank, it’s looking more and more like his contract could prove to be an anchor to the team’s long-term salary cap success. After posting at least 12 goals and 40 points for the previous four seasons, Dubinsky tallied just six goals and 10 assists and his productivity may be at an end for the 32 year old. Unfortunately, he has three more years at $5.85MM, which are numbers handed to a second-line center, not a fourth-liner. Another poor season could see Columbus try to dump his contract as quickly as possible. Foligno is in a similar boat as he had one of the worst seasons of his career as he posted just 15 goals and 33 points. The 30-year-old also could be in decline unless he can have a bounce-back season.

The hard-hitting Savard proved to have a solid season after being separated from long-time partner Jack Johnson, but found his game after being paired with trade deadline acquisition Ian Cole. While his offensive numbers decreased (23 points down to 16 points this year), the 6-foot-2, 227-pound Savard was a solid presence on the blue line and hopefully has a few more years left in the tank. Nash should provide some veteran depth on the team’s bottom-six.

Bjorkstrand finally was handed a full-time position with Columbus as he played 82 games last season, but the 23-year-old winger delivered, posting 11 goals and 40 points with the potential to be a breakout candidate.

Much of the success of Columbus and its future will fall on the shoulders of Atkinson, who had a breakout season in 2016-17 with 35 goals and 62 points and was rewarded with a seven-year, $41.13MM extension. He responded with a disappointing season as he tallied 24 goals and 46 points in 65 games. He did deal with multiple injuries that may have had an effect on that season, but Atkinson must step up and prove he was worthy of that contract which kicks in this year if Columbus has any chance to take that next step and go deeper into the playoffs.

Jenner is another player who has seen his numbers drop significantly after a big season. Jenner posted a 30-goal season back in 2015-16, but has been unable to duplicate that season. The 25-year-old has managed just 31 goals in the past two years combined, but provides much-needed physicality as he has posted more than 200 hits in each of the last four seasons. Wennberg is another center who struggled with injuries all season and had a down year. After posting a 59-point season in 2016-17, he managed just 35 points and found himself playing on the team’s third line for quite a while. However, if he can remain healthy, he could easily work his way back to the team’s No. 2 center position. 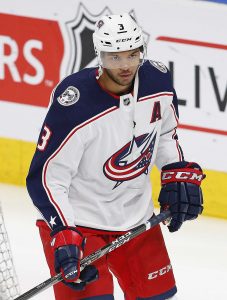 Jones had a breakout season for the Blue Jackets and could, along with Werenski, be two of the top defensemen in the league. The 23-year-old boasted career highs in goals (16), assists (41) and points (57) and he continues to improve and could find himself to be a Norris Trophy candidate as soon as next year if he keeps up his play.

Columbus’ biggest problems are right in front of them and the success of their franchise may come down to Panarin’s situation. If the team trades him, they need to walk away with a solid return, so the team can move forward. Obviously, if Kekalainen can convince him to re-sign with the franchise, that would be the best-case scenario, but the team should look to trade him as soon as possible otherwise they will find themselves in similar situations to that of Erik Karlsson in Ottawa or Max Pacioretty in Montreal, as both of their values continue to shrink daily.