The wait is over for Shea Theodore, who has finally been recalled by the Vegas Golden Knights. After both Jason Garrison and Griffin Reinhart have cleared waivers in recent days, the team now has enough roster flexibility to call up Theodore, who was expected to be one of the key members of the expansion team this year. 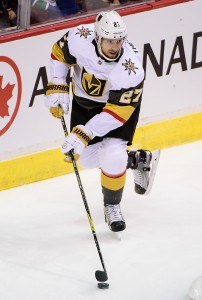 Acquired from the Anaheim Ducks during the expansion process in exchange for taking Clayton Stoner and his contract off their hands, Theodore was considered the prize of the draft. The blue-chip defense prospect had spent 53 games in the NHL to that point and looked ready to become a top contributor in the league. Still, even with his high-end potential the team sent him to the AHL to start the year because of his status as waiver-exempt.

As the team kept winning—Vegas is now 8-1 to start the year—it was harder to justify removing anyone from the roster, and there just wasn’t room for the defenseman to make his mark. Patiently he waited in the AHL playing for the Chicago Wolves, where he dominated to the tune of 11 points in eight games. It was clear his time was coming, just as soon as GM George McPhee felt comfortable trying to sneak Reinhart through waivers.

With Stoner on injured reserve, and now Reinhart and Garrison in the minor leagues the Golden Knights are down to just eight defensemen on the roster, a number that is far less unusual than when they were carrying ten earlier in the year. Even though he’s the newest member, Theodore will likely go straight into the lineup and could even start logging important minutes right away. Though he’s not as polished as some of the other options the Golden Knights have, his dynamic offensive skill and excellent skating ability should make him one of the most exciting players in Vegas right from the start.

For a team that was expected to struggle this season, it’s an awfully good start to the year. They’ll now insert another good young player into a lineup that has shown it’s more than just cast-offs and wash-ups. The Golden Knights will take on the New York Islanders tonight in the first game of a grueling six-game road trip.