One of the last remaining restricted free agents, Zemgus Girgensons has signed with the Buffalo Sabres. The team announced the two-year contract that carries an average annual value of $1.6MM. Girgensons was coming off a one-year, $1.15MM deal and was Buffalo’s last RFA. 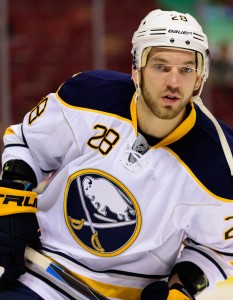 Girgensons, 23, still hasn’t been able to fulfill the potential that made him a 14th-overall pick in 2012. The Latvian center has taken steps backwards offensively since his career-high 30-point season in 2014-15, and last year was given just over 13 minutes a night of ice time. With Ryan O’Reilly and Jack Eichel entrenched as the top two options, Girgensons has basically been reduced to a checking option for the team.

Even though he hasn’t turned in much offense, a $3.2MM guarantee is basically no-risk for the Sabres. He’s coming in less than a million dollars over the minimum contract, and does have some redeeming factors. His shot suppression rate as a defensive player has been good, and he’s one of the most physical forwards on the team—especially with Marcus Foligno now in Minnesota.

It will be interesting to see how the team deploys him this season, with Johan Larsson back from a season-ending injury and Jacob Josefson signed as a depth center. Girgensons will be competing with both players for ice time, and that’s if the team keeps Sam Reinhart on the wing all season.

For Buffalo, this leaves them with just under $7MM in cap space to go after some of the NCAA free agents or even perhaps add one of the veteran options still available in free agency. The team should be much improved this year under the guidance of GM Jason Botterill and head coach Phil Housley, as long as they can stay healthy. Last year injuries to almost every key player ruined their season, and they could be in for a big step forward if Jack Eichel suits up for all 82.