The Chicago Blackhawks have locked up a valuable piece, signing Richard Panik to a two-year contract extension.  The deal is worth $2.8MM per year, and will expire after the 2018-19 season. Panik was set to become a restricted free agent this summer, and had arbitration rights that would have likely awarded a hefty raise. 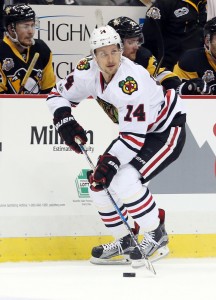 Formerly a failed prospect that bounced through two organizations, Panik was acquired by the Blackhawks for Jeremy Morin in early 2016 and has found a perfect fit in Chicago. While the Hawks have searched for ages to find wingers for Jonathan Toews, Panik slid in nicely beside the captain and scored 22 goals this season, easily a career high. The former second-round pick is still just 26, and coming off a 44 point season looks like a core piece for the Hawks going forward.

The interesting part of this deal though is how little cap space the Blackhawks had even before factoring in his ~$2MM raise. Including Panik, the Blackhawks now have over $73MM dedicated to contracts for next season already, and while the salary cap is expected to go up to somewhere around $75-76MM, that doesn’t leave them much room to work with. Artemi Panarin’s bonuses from this year are also carrying over, which would actually push them over that threshold. Their remaining restricted free agents include Tomas Jurco, Michal Kempny and Dennis Rasmussen, and while none of those names deserve a huge raise they will nonetheless cost something. It seems Chicago will have to move out an asset once again to maintain their salary cap structure, following the trend that has seen Teuvo Teravainen, Brandon Saad, Nick Leddy and others get shipped out long before their usefulness expired.

While a 20-goal scored for under $3MM is a solid deal for any team—as Pierre Lebrun of TSN points out, saying that Panik left money on the table to stay in Chicago—it will have ramifications elsewhere on the roster as the summer goes on. Getting out from under Brent Seabrook or Marian Hossa’s huge deals would be beneficial for Chicago, but getting them to waive their no-movement clauses and finding a taker for the huge cap hits and term will be difficult.

Pierre LeBrun of TSN provided the financial details on the contract.