After the news came out this weekend that the Iiro Pakarinen had signed an extension with the Edmonton Oilers, the team officially announced the one-year contract today. Pakarinen was set to become a free agent this summer, but will now earn $725K next season on a one-way deal. 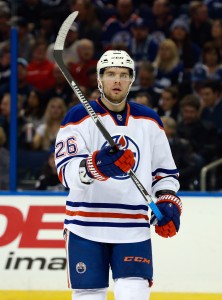 Pakarinen ended up getting into 14 games with the NHL club this season, scoring four points and generally using his physicality to give his team some energy. Last year, in 63 games the Finnish forward scored 13 points and registered 152 hits. Drafted in the seventh round by the Florida Panthers back in 2011, he’s never shown much of a scoring touch at the NHL level.

The important part of the signing for the Oilers isn’t that they get the 25-year old forward under control on a relatively cheap contract, but that he fills the forward exposure requirement for the expansion draft. Each team has to expose at least two forwards that are signed through 2018 and played in either 40 games this season or 70 the past two. Before signing Pakarinen, the only forwards that met this requirement were Jordan Eberle, Ryan Nugent-Hopkins, Benoit Pouliot, Mark Letestu and Patrick Maroon. Now, with Pouliot in all likelihood, Pakarinen will be left exposed.

He likely won’t be selected by the Vegas Golden Knights, meaning Pakarinen should be battling for a spot in the Oilers’ bottom-six again next season. With players like David Desharnais, Matt Hendricks and Tyler Pitlick all set to become unrestricted free agents in July, perhaps there will be more room for him this year.