The Florida Panthers have locked up another young forward.  The team has come to a six-year extension with Jonathan Huberdeau that will pay him $35.4MM ($5.9MM AAV). Currently under contract for one more season, Huberdeau is earning $3.25MM in 2016-17, and would be an arbitration-eligible restricted free agent next summer. 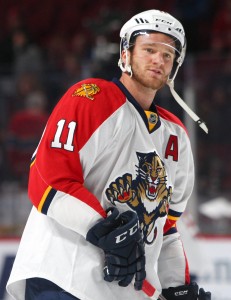 The 23-year old was once the third overall pick by Florida in the 2011 draft, and has done nothing but score in his short NHL career. In 272 career games, the former Saint John Sea Dog has 172 points, including a career-high 59 last season. Skating mostly alongside Aleksander Barkov and Jaromir Jagr, the trio formed one of the more dominant lines in the Eastern conference last season, combining for 184 points.

With it, the team has created cap certainty in a world where that’s very valuable from year to year, and has built a core that is easily a playoff contender every season. With no one cracking $8MM per season (Ekblad comes the closest at $7.5MM) they’ve also ensured that they won’t have too much money tied up in a single player or pair like many of the other cup contenders around the league.

Bob McKenzie of TSN was first to report the sides were close, and Chris Johnston of Sportsnet reported it was done.