The Edmonton Oilers have cleared even more cap space. Duncan Keith has decided to retire, which will not only open cap space for the Oilers but also means a significant cap recapture penalty for the Chicago Blackhawks:

Cap recapture is a function of the CBA that penalizes teams for previously signing extremely front-loaded contracts. When Keith signed his 13-year, $72MM deal in 2009, the last few years included a very low salary in order to drop the overall average. 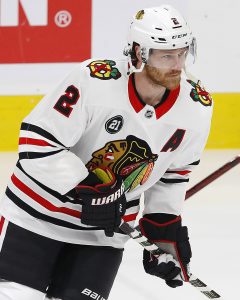 For instance, he would have only earned $1.5MM this season in actual salary. The Blackhawks then must repay the savings they received in the early part of the contract–Keith was earning $8MM per season at the start of the deal while carrying a cap hit of just $5.54MM.

On the other end of that coin, the Oilers should actually receive a cap credit, as they paid the elevated cap hit this season despite Keith only making $2.1MM. Unfortunately, that credit is apparently being removed by the NHL–though a grievance process is possible through the NHLPA. For now, they will only receive the benefit of clearing the $5.54MM cap hit off the books for 2022-23.

While the cap implications will cloud Keith’s retirement, nothing should overshadow the fact that one of the best players of his generation is calling it quits.

During his 16 years with Chicago, he averaged nearly 25 minutes a night, won the Norris Trophy twice and the Conn Smythe in 2015. He sits 34th all-time in points from a defenseman, and 26th in games played.

When he is eligible, Keith will have a great case for Hall of Fame induction, as a player who was legitimately at (or at least near) the top of his position for a long stretch in his prime.