The Devils and Penguins have swapped defensemen as New Jersey has acquired defenseman John Marino from Pittsburgh in exchange for blueliner Ty Smith and a 2023 third-round pick.  Both teams have announced the swap.  Devils GM Tom Fitzgerald released the following statement:

John is a competitive, highly mobile defenseman who strengthens our back end. He takes pride in his game away from the puck and his puck management and ability to transition play will fit in nicely with our style and the strengths of our forward group. This is another move focused on improving our club today, while also providing certainty and stability for roster flexibility as we continue to build.

The 25-year-old Marino made an immediate impact in his rookie season back in 2019-20, recording 26 points in 56 games.  Pittsburgh had acquired his rights from Edmonton in the 2019 offseason for a sixth-round pick and that type of immediate return was quite impressive.  So much so, in fact, that then-GM Jim Rutherford handed Marino a six-year, $26.4MM contract back in January of 2021, a deal that still has five years remaining.

However, things didn’t go as well for Marino and the Penguins since then.  He struggled in the pandemic-shortened 2020-21 campaign before rebounding a little bit last season, recording a goal and 24 assists in 81 games while still logging over 20 minutes a night, a number that jumped to over 23 minutes per contest in their first-round playoff loss to the Rangers.

In Marino, New Jersey gets a defender that is capable of playing top-four minutes now as evidenced by the fact that he has averaged over 20 minutes per contest over each of his three NHL seasons.  A right-shot rearguard, Marino also gives them some insurance on the right side with Damon Severson a year away from unrestricted free agency.  If he departs next summer, Marino could simply take Severson’s spot behind Dougie Hamilton on their depth chart which is likely the stability for roster flexibility that Fitzgerald spoke of in his statement. 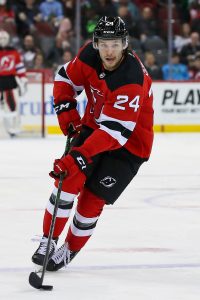 As for Smith, the 22-year-old was a first-round pick of the Devils back in 2018 (17th overall) and made a very strong first impression in his rookie year in 2020-21 when he picked up 23 points in 48 games while averaging over 20 minutes a game himself.  However, things certainly did not go well last season as his production dropped to 20 points in 66 contests while his defensive metrics took a tumble.  Nevertheless, he’s certainly young enough to rebound not unlike Marino did last season.

While Smith is an intriguing addition, the key to the trade for Pittsburgh might very well be the financial flexibility gained.  Smith still has a year to go on his entry-level deal, one that carries a cap hit of just $863K plus an additional $400K in performance bonuses.  Compared to Marino’s $4.4MM cap charge, Pittsburgh has freed up over $3.5MM in cap space for next season (not including the bonuses).  That money is basically all of the cap space they have left which they will need in order to re-sign RFA winger Kasperi Kapanen this summer.

It’s also worth noting that Pittsburgh now has a bit of a logjam on the left side of their back end with Smith joining lefties Brian Dumoulin, Michael Matheson, and Marcus Pettersson.  The Penguins have been known to be shopping Pettersson in the past and this type of move could very well intensify the desire to get a trade done, especially if they can free up a little more cap flexibility in the process.

As for New Jersey’s offseason, there is still a lot of work to be done.  Per CapFriendly, the Devils have just under $13MM in cap space left following this trade with a big chunk of that set to go to RFA winger Jesper Bratt.  Forwards Miles Wood and Jesper Boqvist also need new deals as does recent acquisition Vitek Vanecek; the netminder is in his final year of RFA eligibility and will be looking at a significant raise after making the league minimum the last three years.  As a result, their heavy lifting in terms of adding to their roster may be finished with the focus now turning to re-signing their RFAs.