The Winnipeg Jets are at a crossroads, after failing to even reach the playoffs in a season they were expecting to contend for the Stanley Cup. The team is without a head coach, has uncertainty regarding the next contract for Pierre-Luc Dubois, and is closing in on the end of long-term deals for two of their most prominent offensive pieces.

Blake Wheeler and Mark Scheifele are both scheduled for unrestricted free agency following the 2023-24 season, and while the latter may not be on the move despite some questionable comments, the team is apparently exploring the market on the former. 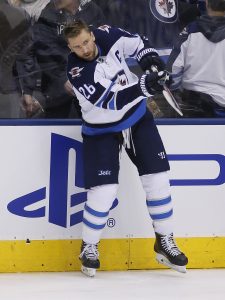 Frank Seravalli of Daily Faceoff explains that the Jets have begun to engage with teams on the possibility of moving Wheeler, and points out that the captain’s full no-trade clause will change on July 1, when he will have to submit a five-team list that he would accept a trade to.

Of course, Wheeler will also turn 36 later this summer and despite strong offensive results, has been criticized heavily in recent years for his overall contributions. The 6’5″ winger had just two goals through his first 30 games of this season, by which point the Jets were already well behind the pace and struggling to stay relevant. He did finish with 17 goals and 60 points total in 65 games but had poor defensive metrics once again, and relied heavily on easy deployment to find so much scoring success.

He also comes with a prohibitive $8.25MM cap hit for the next two seasons (though the actual salary owed is a bit lower than that), limiting the number of teams that could justify bringing him on without the Jets retaining some of the money.

Still, in the right situation, he can still be a strong contributor and perhaps be an option for a team looking to push over the top next season. It would be a drastic culture shift to see the team’s captain and long-standing cornerstone leave–Wheeler has been with the franchise since it still played in Atlanta–but there are winds of change blowing in Winnipeg after such a disappointing year.