The Dallas Stars have reached a one-year extension with Denis Gurianov, giving him quite the birthday present as he turns 25. The deal will carry a salary of $2.9MM, which would have been Gurianov’s qualifying offer this summer. 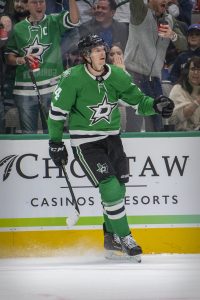 A one-year deal avoids any arbitration dealings with the young forward, something he likely wasn’t looking forward to anyway after a bit of a disappointing year. After reaching the 20-goal mark in 2019-20 and still posting 12 in 55 games last season, Gurianov finished this year with just 11 tallies in 73 games. The big winger managed just 144 shots on the year, a huge step backward in terms of per-game rate. His ice time was also decreased to just over 14 minutes a night and he saw more defensive deployment as the coaching staff gave the top line as many offensive zone starts as possible.

Still, a $2.9MM contract is nothing to sneeze at, and it will set Gurianov up with plenty of options next summer. Scheduled for unrestricted free agency in the summer of 2024, he could go through arbitration a year from now and get to the open market as quickly as possible. Like Jack Roslovic, another 25-year-old who signed today, hitting the market at 27 could mean a substantial payday if Gurianov can put up strong numbers over the next two years.

A one-year deal also gives the Stars more time to see if Gurianov is really a fit long-term and if the team is in the right competitive window to make that kind of commitment. There is basically no risk involved here, even if it could result in a few more dollars down the road if he proves worthy of it.

As the playoffs draw closer to an end, teams around the league are obviously starting to get down to business with their pending free agents. Roslovic and Gurianov have now provided some templates for teams dealing with arbitration-eligible RFAs, and perhaps indicated that there won’t be as many long-term or multi-year deals as expected.

The Stars of course have two extremely important RFAs that are not arbitration-eligible in Jason Robertson and Jake Oettinger, who may be looking at much bigger numbers.