The Buffalo Sabres will have a second goaltender in the rafters next season. Ryan Miller’s No. 30 will be retired by the team, joining Dominik Hasek as the only two netminders in franchise history to receive the honor. 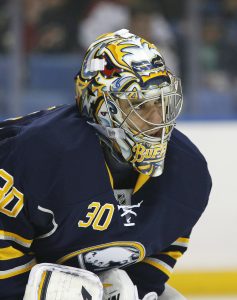 Ryan Miller embodied what people in Western New York expect from those who wear a Buffalo Sabres uniform: on-ice excellence, commitment, and authentic love for this community. His lasting relationship with the people here in Buffalo remains a standard we strive to follow every day.

We are thrilled for Ryan to take his rightful place alongside his fellow Sabres legends and look forward to celebrating his career.

One of the greatest American-born goaltenders in history, Miller played 540 regular season games for the Sabres over parts of 11 seasons, the most in franchise history. He also leads in wins (284) and saves (16,217), having posted a strong .916 save percentage over his time in Buffalo. While that doesn’t quite touch what Hasek did, Miller’s time with the Sabres was outstanding, culminating in a Vezina Trophy in 2010 as the league’s best netminder.

Interestingly enough, it was 39 that Miller wore at Michigan State and what he would have worn in Buffalo, had it not been for Hasek’s legacy with the team. The two have been compared and linked for decades, as the younger netminder came into the spotlight soon after the legend left. They’ll now both be in the rafters at the KeyBank Center, though a date has not been revealed for Miller’s ceremony to this point.