The offseason has arrived for half of the league’s teams that aren’t playoff-bound plus some that were eliminated early in the playoffs.  It’s time to examine what they will need to accomplish over the coming months.  Next up is a look at Ottawa.

Before last season, Senators GM Pierre Dorion declared the rebuild over.  The team went on to post a weaker points percentage and finished seventh in the Atlantic Division after finishing sixth in the North the year before.  Nevertheless, they’re still on the right path towards trying to get back into the playoff picture and their checklist follows that mindset with a mixture of retaining their current core and trying to add to it.

One area that hasn’t been pretty the last couple of years is between the pipes.  Anton Forsberg exceeded expectations as a waiver claim and did well enough to earn himself a three-year extension just before the trade deadline.  After him, however, there are question marks; even Forsberg is somewhat of a question with just 104 games under his belt.

Matt Murray has struggled mightily in his two seasons with Ottawa, posting a 3.23 GAA and a SV% of just .899 over that stretch.  He suffered a concussion back in early March, the third documented one of his career already after having two in quick succession with Pittsburgh.  At this point, it’s hard to rely on him to provide much even though he has two years left on his contract at a $6.25MM AAV, one that’s effectively untradeable.

Their other in-house option is Filip Gustavsson.  Once viewed as a key goalie prospect of Ottawa’s future, he has underwhelmed in his limited NHL action so far.  He is waiver-eligible next season so he’s likely to be on the roster although relying on him would also be risky.

This is not a trio of goaltenders that will inspire a lot of confidence for a team with playoff aspirations.  Finding a capable second goaltender to partner with Forsberg would give them a big lift.  It’ll be easier said than done with Murray on the books and Gustavsson’s trade value not exactly at its peak but Dorion would be wise to try to bring in an upgrade between the pipes.

Regardless of whether or not they’re able to shore up the goaltending, Dorion needs to start focusing on some win-now moves.  They’re not going to go from being near the basement to a contender right away but the time has come to start shopping for veterans that are going to help the process of turning things around.

Up front, that means looking for a top-six winger.  Ottawa’s front line appears to be set with Brady Tkachuk and Drake Batherson flanking Joshua Norris.  However, with Tim Stutzle anchoring the second line, his options on the wing aren’t anywhere near as strong and have been a collection of youngsters looking to establish themselves in the NHL or a veteran like Connor Brown who has been more of a two-way player than a consistent offensive threat.  Bringing in a quality scoring winger would elevate Stutzle’s play and really give the Senators a second line that’s capable of producing with consistency.

There’s also work that needs to be done on the back end beyond non-tendering Victor Mete and parting with Michael Del Zotto.  Travis Hamonic was brought in to try to stabilize a back end that bleeds shots allowed (more than 33 per game after allowing just over 32 per game the year before) but while he’s a stable veteran, that alone isn’t going to change their fortunes.  A full season from Jake Sanderson probably doesn’t hurt but another impact defender would make a big difference.

Ottawa doesn’t yet have $60MM in commitments for next season and while that will change once they re-sign their restricted free agents, they will have ample room to try to add.  If they opt to buy out Colin White (at a cap charge of $3.75MM total spread out over six seasons), they’ll have nearly $4MM extra to work with this summer as well. 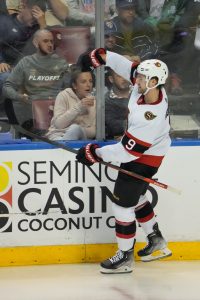 Last summer, it was Tkachuk that was in line for a big contract coming off his entry-level deal.  This year, it’s Norris.  The 23-year-old had a breakout campaign, leading Ottawa in goals with 35 while finishing third in points with 55.  Dorion’s preference has been to sign long-term contracts off expiring entry-level pacts as he did for Tkachuk, Batherson, and Thomas Chabot so he’s likely going to want to do the same here.

One of the challenges that both sides will here is Norris’ shorter track record.  His first season was just three games and he has only 125 career NHL appearances under his belt, the equivalent of a year and a half.  That isn’t a big sample size to go off of and he doesn’t have arbitration eligibility so this has the potential to be a particularly drawn-out negotiation.  If Ottawa wants to skip the bridge contract and look for a long-term pact, Norris’ camp is likely to point to Nick Suzuki’s contract in Montreal (eight years, $7.875MM AAV) which would also stay within their salary structure as it would check in a little below Tkachuk and Chabot.

Speaking of long-term contracts handed out to players coming off of their entry-level contracts, Ottawa could be in that situation next summer with Stutzle’s deal coming to an end.  After a stronger sophomore year, Dorion will likely want to kick the tires on what an extension now might cost, knowing that a stronger platform season would result in a higher asking price the following year.  It’s likely to fall in the range of Tkachuk, Chabot, and probably Norris in terms of the AAV.

Ottawa also has a pair of intriguing players that will be unrestricted next summer and thus eligible for extension talks at the start of the new league year in mid-July.  Brown has been a solid performer since coming over from Toronto but is his role likelier to stay where it is now or do they envision him being more of a third-liner down the road?  The answer to that will go a long way in determining whether or not discussions of a new deal make sense.

The other UFA of note in 2023 is defenseman Artem Zub.  His numbers don’t jump off the page (22 points in 81 games) but he logged over 21 minutes a night and is a right-shot defender that will hit the open market in 2023 at the age of 27.  In other words, there is going to be a lot of interest if he gets to that point.  Dorion moved quickly to extend Zub when his entry-level contract ended and it wouldn’t be surprising to see him try to get an early extension done again.  If so, his teammate Nikita Zaitsev’s contract ($4.5MM AAV) is a possible comparable.

For the last few seasons, the Senators have been near the bottom in spending on the cap.  As their young core matures and other veterans are added or brought in to deepen the roster, that’s going to change fast.  The more certainty they can get on the spending front, the better which is why being proactive on the contract discussion front should be a priority for Dorion.