With the All-Star break now behind us, the trade deadline looms large and is now less than a month away.  Where does each team stand and what moves should they be looking to make?  We continue our look around the league with the New York Rangers.

The Rangers opted to shake things up over the offseason with Chris Drury being promoted to GM and Gerard Gallant taking over as their new head coach.  The roster was also reshaped and the results have certainly been promising as they’ve gone from a team that missed the playoffs to one that is within striking distance of first place in the East.  As a result, Drury will be busy looking to add but with their salary cap situation, they will be balancing the short term and the long term with any acquisitions. 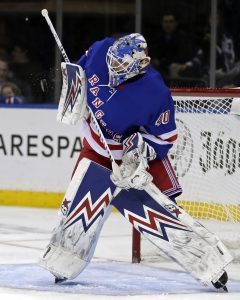 Most contenders wouldn’t want to necessarily subtract from their current roster but it’s an option that New York may need to consider with backup goaltender Alexandar Georgiev.  The 26-year-old has made it known that he’d like to play more but with Igor Shesterkin in the fold, that’s not going to happen barring injury.  The pending restricted free agent carries a $2.425MM cap hit and is owed a qualifying offer of $2.65MM, one that might be a bit too pricey for them for next season.  There are some teams that would likely want to get a longer look at Georgiev to see if he could be a longer-term option although the Rangers would be wise to get another goaltender if they opted to move Georgiev now with veteran Keith Kinkaid serving as their third-string option.

Things have not gone well for winger Vitali Kravtsov in his time with the Rangers.  The 22-year-old didn’t make the team out of training camp, went back to the KHL, and it’s clear a change of scenery would be beneficial.  However, considering he was the ninth overall selection in 2019, his draft status may carry some weight and be appealing to a team looking for a prospect that’s a little more developed over a draft pick.  He’s a restricted free agent this summer but it’s hard to see him commanding a big raise on his $925K AAV since he only has 22 games under his belt.

Young defensemen are always desirable commodities to rebuilding teams and New York has one on its roster in Libor Hajek that is struggling to get into the lineup.  He has played in just 14 NHL games this season plus five more on a conditioning assignment but is only a year removed from playing in nearly 80% of their games last year.  He signed for his qualifying offer last summer for just over $874K and the lack of playing time doesn’t give him a case for much of a raise.  With youngster Braden Schneider starting to establish himself, the path to playing time is even steeper now for Hajek and he seems like a logical player that could be added into a trade.

The three-year, $7.5MM given to blueliner Patrik Nemeth raised some eyebrows and he has had a limited role on the third pairing so far without doing a whole lot.  If Drury looks to bring someone in with term left on their contract, Nemeth is the type of player they could try to use as a salary offset.

1) Forward Depth: Injuries have thinned out New York’s forward depth at times this season and has left their bottom six group a little weaker than they’d like.  Replacing Sammy Blais’ grit is one area they’d likely want to add but bringing in a two-way player that can score a bit and kill penalties is another element that would certainly be beneficial for them to add.

2) Top-Four Defender: Adam Fox and Jacob Trouba are proven top-four pieces but after that, New York’s back end primarily consists of younger players or depth veterans like Nemeth or Jarred Tinordi.  A veteran that can allow them to take a bit of pressure off their younger players would help with an emphasis on being able to play a key defensive role.

3) Long-Term Center: Mika Zibanejad has his extension for next season so he’ll be in place for the long haul.  But Ryan Strome’s fate remains in question and Filip Chytil likely isn’t ready to step onto the second line if Strome doesn’t re-sign.  If there’s a way to get a long-term second pivot, that would be a nice pickup for Drury even if it means that Strome winds up moving on.