It’s a joyous day on the Island, as the New York Islanders activated defenseman Ryan Pulock off long-term injured reserve today, as reported by Newsday’s Andrew Gross. Defenseman Robin Salo, who does not require waivers, is no longer listed on the roster, likely meaning that’s he’s been assigned to the AHL’s Bridgeport Islanders or to the taxi squad. 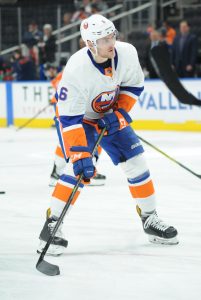 Pulock, like many of the Islanders players, had a rocky start to the beginning of the season. Normally the team’s best offensive defenseman, he had just two points in 12 games before landing on long-term injured reserve with a lower-body injury.

What was originally supposed to be five weeks turned into two and a half months, forcing the Islanders’ depth on defense to be challenged. Players like Noah Dobson revelled in the opportunity, as he’s playing the best hockey of his career. Now, against the Ottawa Senators tonight, the Islanders will be able to ice a fully healthy defense for the first time since the first month of the season.

Pulock’s low production at the beginning of the year was likely just a spell of bad luck fuelled by low shooting percentages across the team. Albeit in a small sample size, many advanced analytics don’t suggest any downturn in play from Pulock.

Under contract until 2030 with an eight-year, $49.2MM contract that kicks in next season, Pulock will get a chance to aid in what needs to be a massive push from the Islanders at this point to make the playoffs. The team is 6-4-0 in their last 10 games but is still a game under a .500 pace, and even with five games in hand on Boston, the current second Wild Card holder, they’re 17 points out of a playoff spot.

It’s unclear as to where Pulock will fit back in the lineup, but if he’s reunited with former partner Adam Pelech, it will mark the return of one of the strongest two-way defense pairings in the league.