In the spirit of the holiday season, PHR will take a look at what teams are thankful for as the season approaches the midway mark. There also might be a few things your team would like down the road. We’ll examine what’s gone well in the early going and what could improve as the season rolls on for the Seattle Kraken.

What are the Kraken thankful for?

This certainly hasn’t been a very successful inaugural season for the Kraken on the ice, but getting a team at all wasn’t always a guarantee. The city of Seattle had lots of momentum toward expansion many times in the past, including serious bids in 1974 and 1990 that failed to come to fruition.

The immediate success that the Vegas Golden Knights experienced by going straight to the Stanley Cup Finals was abnormal, and perhaps set the expectations a little higher for Seattle than they should have been. Getting into the club–especially as further expansion seems unlikely, at least for a while–was the important part here. 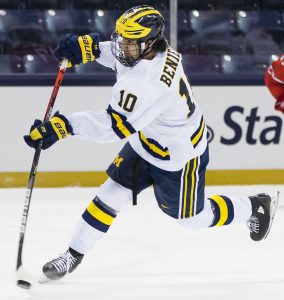 Who are the Kraken thankful for?

It’s been a bit of a frustrating season for Beniers, who missed his chance for a second World Junior gold medal when the tournament was canceled early on. But make no mistake, the second overall pick from 2021 is going to be a core piece for the Kraken before long.

In 21 games for Michigan, the do-it-all centerman has 24 points (including two tonight in a big win against UMass) and could soon suit up at the Olympics for Team USA. If he decides to turn pro and sign after his college season ends, there’s little doubt that he’ll be one of the most exciting players in the lineup for Seattle most nights. Having that presence down the middle is a good start.

What would the Kraken be even more thankful for?

It’s not that the only problem with the Kraken this season has been the goaltending, but it’s certainly been the biggest. The duo of Philipp Grubauer and Chris Driedger–one that combines for a $9.4MM cap hit–has been dreadful, leading to a league-worst .883 team save percentage on the season. If you are more analytically inclined, Grubauer’s -17.8 goals saved above average leads all netminders by a wide margin. The next worst, if you can call it that, is Joonas Korpisalo at -8.65.

The worry here is that Grubauer signed a six-year, $35.4MM deal with Seattle in the offseason, one that already seemed odd at the time but now appears downright dangerous. If the 30-year-old netminder can’t find his game, it could be a boat anchor for the Kraken to deal with through the first part of their history.

This team isn’t as bad as their 10-19-4 record suggests, but they also aren’t anywhere near a playoff contender at this point. The draft picks that everyone though they would acquire through the expansion process should be the target at the deadline, with basically no roster players off the table, even ones with term left on their contracts.

If someone wants to pay up to add Yanni Gourde, the Kraken should consider moving the 30-year-old center. Adam Larsson a relatively inexpensive defense target for a contender? Why not entertain the offer?

The issue for Seattle is that they also handed out several no-trade clauses in their first round of free agency, for whatever reason. Larsson, Grubauer, Jaden Schwartz, and Jamie Oleksiak, were all given full trade protection in their new deals. That kind of early spending is only going to make it more difficult to strip the roster back if that investment proves to be a premature one and the Kraken continue to struggle in the years to come.