Jarvis was in a bit of a tough spot to start the season – he couldn’t be sent to the minors but he wasn’t seeing regular action with Carolina either.  However, he has worked his way into more of a regular role with the team happily going past the nine-game plateau to burn the first year of his deal.  It’s hard to forecast his next deal with him just starting out and from a bonus perspective, it’s unlikely he reaches any of his incentives. 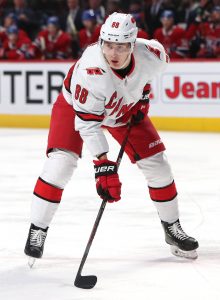 Necas has seen his production tick back a little this year although with 19 points in 31 games, he’s still doing well.  He’s the type of player that Carolina may want to try to sign to a deal that buys out a couple of years of UFA eligibility but the quieter platform year may actually make that tougher as it should make Necas be more agreeable to a bridge deal, allowing him to boost his value before locking in a long-term pact.  He has three ‘A’ bonuses in his deal and is on pace to hit one of those right now although a few others are within reach as well.

Kotkaniemi’s offer sheet was one of the headlines of the offseason as it’s rare that one is tendered and rarer that it isn’t matched.  However, it was enough of an overpayment for Montreal to accept the draft pick compensation instead.  The key word is overpayment though.  The 21-year-old hasn’t produced at a level that would warrant a $6.1MM qualifying offer and while there is a window to take a player to arbitration at a lower rate (85%), that’s still a particularly high salary.  Accordingly, it stands to reason that Carolina will try to sign Kotkaniemi to a long-term deal in the coming weeks and months, one that may come in a little lower than his current price tag with an argument that it would be better than running the risk of a non-tender in the summer.

Niederreiter has shown flashes of being a top offensive player over the past few years but hasn’t been able to sustain it.  This season, he has been on the third line at times and that’s not going to help his market value.  A small decrease on his current AAV is a likelier outcome than a small raise at this point.  That shouldn’t be the case for Trocheck who stands to be one of the top centers to hit the open market if he’s still unsigned by July.  There is always a premium paid for those players and it wouldn’t be too surprising to see him at $6.5MM or more on a long-term deal.  Stepan is still a capable fourth liner but won’t be able to use his prior reputation to boost his value and it’s unlikely he’ll wind up with more money on his next deal although he should be able to come close.  Lorentz will get a small raise on his AAV by default but this is a spot Carolina will need to keep close to the minimum – a one-way deal is doable but it should still be around the $750K mark.

Cole has been a quality veteran shutdown defender for several years although he’s starting to slow down.  He’ll have no problems finding another contract but after taking a pay cut last summer, he may need to do so again this coming summer.  Bear has been decent with his new team but hasn’t been able to move into the top four like they’d have hoped.  He’s owed a $2.4MM qualifying offer and he should get it but he’ll have a hard time making a case that he’s worth substantially more.  Smith has carved out a niche as a depth defender that can play up front as well and that will keep him in the league for a few years but they will be seasons where he’s near the league minimum as he is now.

DeAngelo is going to be one of the more interesting RFA cases to watch for.  As much as he had to sign for cheap on the open market in the summer, he’s two years removed from a 53-point campaign and is producing close to a point per game level this season.  Those are numbers that will carry a lot of weight if he makes it to an arbitration hearing which is the probable outcome if Carolina tenders him a qualifying offer.  Is that a risk they want to take knowing that there are several other core players that need to be re-signed or replaced?  If not, they’ll have to make a big push to try to sign him before the tender deadline and with all of the off-ice factors to consider, there’s a very wide range of what he could sign for.

Staal has always been a quality two-way center and while he may not have always produced at a top-six level, he has done well living up to the price tag of this contract over time.  Things haven’t gone too well this season, however, as he has slowed down and his production has tailed off.  He won’t have any problems getting another contract two years from now but at that time, it’ll be more commensurate with third-line production which could result in his salary being nearly cut in half.  Fast’s contract seemed cheap at the time and still is now for someone that’s a decent secondary scorer in the middle six.  I’d predict that he could land a contract that’s higher than that two years from now but I’d have said that two years ago as well when he opted to take this deal.

Gardiner is out for the season with hip and back trouble and is on LTIR.  At this point, it wouldn’t be surprising to see that be the case next year as well.

It took more than a decade for Andersen to play for the team that originally drafted him but he has been worth the wait as he has been one of the top goalies in the league so far this season.  Carolina’s playing style is a goalie-friendly one but his level of play has been better than most starters at a lower cost.  Two years of that could give him one more shot at a bigger payday somewhere.  Raanta, though often injured, signed for less than what most top backups make which limits the risk involved in signing him.  When he’s healthy, he’s a capable second-stringer but until he can stay in the lineup for an extended period of time, these are the types of contracts he’ll be limited to.

Aho, as you may recall, had been the last player to receive an offer sheet before Kotkaniemi with Carolina ultimately matching.  The deal has been a below-market one for a top center although the term of the contract allows Aho to reach the open market while still in the prime of his career.  A jump past the $10MM mark appears to be a certainty if he continues at this level of play.  Teravainen has turned into quite the prize for taking on Bryan Bickell’s contract back in 2016 (the Hurricanes dealt a pair of draft picks but neither were worth Teravainen) as he has worked his way into being a top-line winger who is making second line money on a team-friendly deal.  He’s in line for another $2MM or so on his next contract.  Martinook was once a third liner for Carolina but has dropped to the fourth line lately, making this deal a bit of an overpayment in terms of value.  It wouldn’t be surprising to see him shopped at some point for someone a bit cheaper to get a bit of cap flexibility.

Skjei hasn’t been quite as impactful for Carolina compared to his time with the Rangers although he hadn’t exactly had the same role either.  They’re deploying him as a steadying presence on the second pairing, a role that he’s a bit overpriced for but the fact he can move up when needed makes it a worthwhile luxury to have.  Pesce, meanwhile, has blossomed from someone who was previously playing Skjei’s role into a top-pairing player while making considerably less than others in that spot on other teams.  He’s looking at a nice raise three years from now whether it’s from Carolina or someone else.

Carolina wanted to avoid going the bridge route with Svechnikov and they were eventually able to do that with a max-term deal back in August.  There is some projection with this contract as he’s not worth that amount now but if he continues to develop and really establishes himself as a consistent scoring threat on the top line, there is the potential for this to be below market value in the back half of the deal.

Meanwhile, Slavin’s contract is definitely below market value and has been for a while now.  He doesn’t light up the scoresheet but he’s above league average in terms of points from a defenseman while his defensive play is among the best in the NHL.  He’ll be 31 when his next contract kicks in but a max-term deal at that time could still very well be an option, especially in a way to keep the AAV down a bit but that price tag will still be considerably higher then than it is now.

Even with Gardiner’s LTIR at their disposal, Carolina doesn’t have a lot of cap space to work with and since it’s LTIR space and not regular cap room, they’re not able to bank anything extra between now and the trade deadline.  GM Don Waddell will probably be fairly quiet over the next few months as a result.

Next summer will be an interesting one for the Hurricanes.  They have around $25MM at their disposal but need to fill half a roster with that money.  There’s room to keep two, maybe three higher-priced players around but not all of them.  They’ll face a similar issue down the road as their below-market contracts expire.  But with only two players signed beyond 2024, Carolina has one of the cleaner long-term cap situations at their disposal to work with which should give them a chance to hang around the mix in the Metropolitan for the next several seasons.