Dach hasn’t progressed as much as anyone in the Chicago organization had hoped.  At 20, he’s still certainly young enough to be a long-term fixture for them but he’s not there yet.  As a result, a bridge deal is quite likely and he’ll have to pick up his play to have a shot at any of his four ‘A’ bonuses worth $212.5K each.  Kurashev has been a useful player that has moved up and down the lineup but his production has been limited each season.  He should be able to get a small raise but it won’t be on a long-term deal.  Johnson has spent most of the season on the big club in a limited role and seems like a good candidate to take a minimum NHL salary next summer in exchange for a higher AHL salary.

Shaw has been on LTIR all season and won’t return but his cap relief will keep Chicago in compliance to the salary cap.  Kubalik’s third NHL campaign hasn’t gone anywhere as well as his first two as he has been more of a depth scorer this season.  He’s owed a $4MM qualifying offer in the summer and that might be too pricey for the Blackhawks to afford which would put him on the open market in a spot to take a pay cut.  They’re in a similar situation with Strome who has struggled to even crack the lineup this season.  A $3.6MM qualifier is what is required and it seems quite unlikely that will be tendered.  Instead, something closer to $2MM on the open market may be doable.  Carpenter is a capable checker but as someone that’s best suited for the fourth line, he’ll be hard-pressed to get much more than that on the open market.  Gabriel was just acquired from Toronto and after clearing waivers at the start of the season, it’s safe to suggest he’ll be capped at a minimum deal next year.

In his prime, de Haan was a quality shutdown defender but he hasn’t been that player for the last few seasons.  He can still kill penalties and play on the third pairing but with no offense to speak of, he’s someone that should be landing closer to $1MM on the open market in the summer.  Jones has been limited due to injury this season which doesn’t help his free agent case.  A small raise beyond the required 5% in his qualifying offer is reasonable but he’s not going to break the bank and a long-term contract makes no sense for him.  Gustafsson caught on with Chicago late in training camp and has been better in his own end although that has coincided with a drop-off in production.  For a player known for his production, that’s not ideal.  It’s hard to see him doing better in free agency in July as a result.

Now 37, Fleury is clearly nearing the end of his career.  He’s having an okay season but he’s going to have a hard time selling himself as a sure-fire starter in the summer.  A one-year deal around half of his current price tag – still in that higher tier for a platoon goalie – may be a more reasonable target if he wants to play another year.  Lankinen is having a tough year compared to his rookie season which isn’t going to help his case in free agency.  He’ll be able to land a raise based on that first year but he looks likelier to settle for something in the lower end of the backup market in the $1.25MM to $1.75MM range.

Kane and Toews have been linked together for well over a decade now and are on their second set of identical contracts.  That won’t happen again two years from now, however.  Kane continues to produce at a top-line rate and while that could change between now and then, there still should be enough interest in him on a medium-term deal for him to remain one of the higher-paid wingers in the league.  That shouldn’t be the case for Toews.  He has struggled considerably this season after missing all of last year due to illness.  Aside from an outlier in 2018-19, he hasn’t produced at a top center level in a while.  If he can turn it around and still produce like a second liner, he could land a deal around half of his current price tag.  But if his current struggles are a sign of things to come, that price tag will be going down even further. 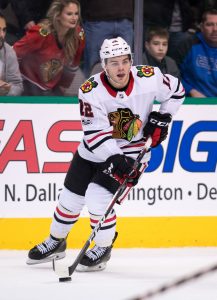 DeBrincat is a particularly interesting RFA case in 2023.  His contract, although it kicked in after the rule change for the qualifying offer, still goes by the old rules since it was signed early.  That means his qualifying offer is $9MM instead of 120% of his AAV.  Right now, there are 19 forwards in the league at that price tag or more and quite a few are centers.  DeBrincat is scoring like a high-end winger but his size is always going to give some teams pause.  It’d be difficult to envision Chicago non-tendering him unless his production falls off a cliff next season but will they be ready to hand him a Kane-like contract to buy out the remaining prime years of his career?  The Blackhawks can offer less but with DeBrincat being a year away from UFA eligibility, he could simply accept the qualifier.  Whoever is at the helm next summer – either interim GM Kyle Davidson or someone else – this is a file that they’ll want to try to address.

Borgstrom’s return to North America hasn’t gone well as he has had a limited role when he has been in the lineup and hasn’t done much with it.  If that continues, he’ll be a non-tender candidate even at a $1.1MM qualifying offer due to his arbitration eligibility.  Connolly is who they took on to add Borgstrom plus some other pieces.  He’s an NHL-caliber player but is making much more than he should.  He’s someone that should be closer to $1MM on the open market and he could get there this summer if Chicago needs to free up some short-term cap room.  Khaira is a capable checker but nothing much has changed for him since he hit the market last summer after being non-tendered.  Accordingly, it’s reasonable to project his next contract should check in close to this one.

Johnson was acquired from Tampa Bay over the summer to give them some extra center depth while adding a second-round pick in exchange for a player who won’t play again (Brent Seabrook).  There’s some value in what they got but it remains an above-market contract and as tight as they are to the cap ceiling, it’s fair to wonder if that was the best utilization of that money.  Hagel has turned into a reliable secondary scorer and was a good undrafted free agent pickup.  As long as he can even hold his own on the third line (and he’s doing better than that now), they’ll get a nice return on their deals.  Entwistle and Hardman are currently on entry-level deals but signed cheap one-way extensions that can be cleared off the cap entirely if they lose their spot.  Otherwise, they’re decent depth pieces for just above the league minimum.

Stillman was the other player of note brought on when they took on Connolly’s contract.  He’s not playing heavy minutes but he’s a regular part of Chicago’s back end.  Assuming he can hold down that sixth spot moving forward, they’ll get okay value at least on this contract but they’re certainly hoping he’ll be able to take on a bigger role down the road.

Jones was the headline acquisition for now-former GM Stan Bowman over the summer and they paid a pretty penny to get him both in terms of what they traded to Columbus and the subsequent extension they gave him to make the 27-year-old one of the top-paid blueliners in the league.  Both felt like overpayments at the time and now but he is a strong defender and for this season at least, he’s on a good value contract before the big one kicks in.  Murphy is a reliable defensive defender that can log heavy minutes and play against top opponents.  There’s certainly value in that and being a right-shot player certainly helps as well.  He’s a fixture for years to come as a result but it’s hard for shutdown defenders to provide surplus value on a contract like this.

For a team that hasn’t had a lot of recent success, the Blackhawks are in a tough spot from a cap perspective.  Even with Shaw’s LTIR, they don’t have a lot of wiggle room to use this season and while they’re probably not going to be buyers at the trade deadline, the lack of space makes it a bit harder to retain money to get a better draft pick or prospect in return.  Next season is going to be quite difficult with around $22MM in cap space and half a roster to fill including both goalies.

Down the road, the pending contracts for Kane and DeBrincat are significant.  It’s a fairly clean cap situation beyond 2022-23 for the time being with just $26.55MM in commitments so cap room won’t be an issue then but two more big deals on the books along with Jones will probably take them out of the market for other top stars.  There’s some flexibility on the horizon for Davidson or whoever winds up with the full-time GM job but some more short-term challenges are what they need to get through first.