With their season starting tomorrow night, the Montreal Canadiens have locked up their future. Nick Suzuki has signed an eight-year extension that will carry an average annual salary of $7.875MM. The deal will start in the 2022-23 season and keeps Suzuki far away from restricted free agency and any potential offer sheet. Chris Johnston of the Toronto Star reports that the deal will include a 10-team no-trade list (which is only applicable for the final four seasons of the contract). PuckPedia tweets the full breakdown: 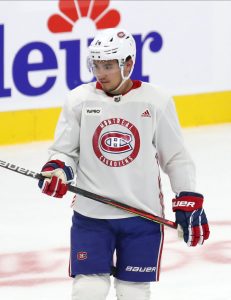 Suzuki, 22, is coming off a very strong season with the Canadiens and has assumed the team’s first-line center spot, an undisputed role now that both Philip Danault and Jesperi Kotkaniemi are playing elsewhere. The young forward recorded 41 points in 56 games, but it was once again his outstanding postseason that really put him on the map for many fans. In 22 games on Montreal’s quest for the Stanley Cup, Suzuki scored seven goals and 16 points while averaging almost 19 minutes a game.

That ice time is likely to only go up from here as he transitions from up-and-comer to established leader, helming the Canadiens attack every night. This extension is betting that he’ll take on that responsibility without issue, making him the team’s highest-paid skater for next season, even eclipsing Shea Weber’s LTIR-bound contract.

Make no mistake, there is risk in a deal of this magnitude for someone so young. Suzuki’s career-high in goals is 15 and he has just 82 points through his 127-game career to this point. While those are fine totals, this deal is assuming they will increase as he enters the prime years of his career; a safe assumption, but one nonetheless.

With the deal registered, the Canadiens now have more than $84MM committed to 18 players for next season. A good chunk of that–$7.86MM–is Weber’s deal that will likely be moved to LTIR once again, but it still means that the team won’t have a ton of extra space to work with moving forward. Long-term deals for Suzuki, Brendan Gallagher, Josh Anderson, Christian Dvorak, Jeff Petry, David Savard, Jake Evans, Joel Armia, and Carey Price mean that this group is unlikely to see sweeping changes for quite some time. Even Mike Hoffman, Joel Edmundson, and Tyler Toffoli are signed for two more years after this season, meaning this is essentially the group for the next while.

No matter what, this is a contract extension that has a high probability of looking like a steal in a few years, should Suzuki continue on his current development path. At worst, he’s a little overpaid as he settles into the level he has already reached. But the Canadiens haven’t had a franchise center in some time, and certainly weren’t going to risk letting this one get poached in restricted free agency, or increase his price with a true breakout offensive campaign.