The Red Wings have added to their back end in advance of tomorrow’s transactions freeze, acquiring defenseman Nick Leddy from the Islanders in exchange for winger Richard Panik and the 52nd overall pick in this month’s draft.  Detroit is also retaining 50% of Panik’s contract, using their first of three salary retention slots in the process.  Both teams have announced the trade. 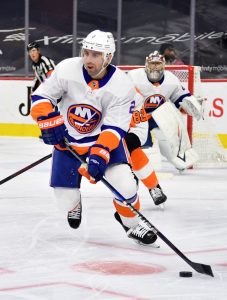 Earlier this week, it was reported that Leddy was being shopped to avoid the potential of losing him to Seattle in the upcoming expansion draft.  The 30-year-old had logged steady minutes over his seven years with the Islanders, averaging more than 21 minutes per game for each of the last six seasons.  Leddy even had a bounce-back year offensively this past season, tallying 31 points in 56 games.  However, with the Islanders having over $77MM in commitments for next season with several key players in need of new contracts, some money needed to be moved and Leddy’s $5.5MM price tag became the casualty.

Panik was acquired as salary ballast from Washington back at the trade deadline as part of the Anthony Mantha deal and is on the move again as salary ballast in this trade.  He has two years left on his deal with a $2.75MM AAV so with Detroit retaining half of that price tag, New York frees up $4.125MM in cap room with the move.  They also get a fairly high draft pick and Panik at a $1.375MM cost is serviceable for someone who is best served as a role player at this stage of his career after seeing his offensive numbers drop for four straight seasons to just 13 in 48 games in 2020-21.

Meanwhile, Leddy immediately becomes one of Detroit’s top defensemen but with his age and contract which expires next summer, it certainly doesn’t feel as if he’ll be a long-term fixture on their back end, especially since they’re still in rebuilding mode.  Instead, he’s someone that appears to be a strong candidate to be flipped closer to the trade deadline, perhaps with some salary retention as well to make it easier for a contender to add him later in the season where they may be able to recoup the second-rounder they’ve given up here.

As for New York’s expansion situation, this ensures they won’t lose Leddy for free but still poses some questions.  Each team must leave at least one signed defenseman unprotected that has played in at least 54 games over the past two years (or played in 27 games this season).  The Islanders only have three of those in Ryan Pulock, Adam Pelech, and Scott Mayfield.  Presumably, those are the three they want to keep so they will now need to acquire or sign a defenseman to serve as the mandatory unprotected player before the lists are submitted on Saturday.  Veterans Braydon Coburn and Andy Greene meet the games played requirement so a one-year contract for them would satisfy the requirement.