The Blue Jackets don’t have much in the way of impact center depth and it has been an area that they have been trying to address for several years now.  Last summer, they picked up Max Domi from Montreal in a trade for Josh Anderson to try to help that issue but he had a tough year.  Now, TSN’s Darren Dreger is reporting (Twitter link) that Columbus is leaning towards leaving Domi unprotected on their expansion list which is due to the league later today. 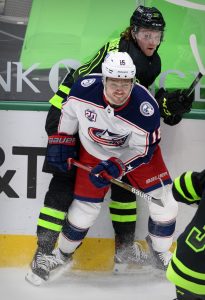 The 26-year-old struggled considerably last season, posting just nine goals and 15 assists in 54 games, hardly the type of production they were expecting considering he had at least 38 points in his previous five NHL campaigns.  Along the way, he went from playing down the middle to being shifted back to the wing and was dropped down the depth chart as the season progressed.

To make matters worse, Domi underwent shoulder surgery last month to repair a torn labrum.  The expected recovery time for that procedure is five to six months which means he will miss at least the first month of next season and potentially more.  Perhaps it’s for that reason that GM Jarmo Kekalainen is considering the possibility of leaving him exposed.  However, he’s also owed $6MM in salary for the upcoming season which could also serve as a deterrent although Dreger believes Domi would likely be selected by the Kraken.

At any rate, it certainly doesn’t appear as if Domi will be in the long-term plans for the Blue Jackets and he’s set to become an unrestricted free agent next summer which makes him a trade candidate as a rental by either Columbus or Seattle if they do indeed select him.  At any rate, Kekalainen’s search for impact centers is sure to continue.