Back in 2017, the Canadiens lost Alexei Emelin to Vegas.  Unless they want to risk losing a notable forward this time around, history could repeat itself with Seattle likely to be interested in one of Montreal’s blueliners.

The goaltending one is pretty easy.  Price will be protected and Allen, beginning a cheaper two-year deal next season, will be exposed.  He will certainly be under consideration by the Kraken.

On the back end, Petry’s no-move clause means he’ll be protected and while Weber’s contract could be viewed as enough of a deterrent to leave him exposed, his performance in the playoffs so far makes that unlikely.  It would be difficult for Montreal to leave their captain available.

If they go with the standard 7/3/1 scheme, that only leaves one spot left and a trio of interesting options to choose from.  A few years ago, Chiarot was a role player with Winnipeg and at the time he signed his three-year, $10.5MM deal with the Canadiens, it seemed like quite the overpayment.  Then he played his way onto the top pairing, a spot he maintained for a lot of this year.  He’s the only full-time skater to not record a point so far in the playoffs but he’s also averaging 25:37 per game, just one second behind Weber for the team lead.  Even though that’s not necessarily the ideal role for him, Chiarot would probably be one of Seattle’s better rearguards and with him being on an affordable expiring contract, he’s someone that could yield a notable return if they looked to flip him.

Then there’s Edmundson.  While his four-year, $14MM contract also looked like a small overpayment (especially considering the way the UFA market went), he played quite well with Petry this season and certainly solidified their top-four.  That has continued in the playoffs where he’s up over 23 minutes per game.  All of a sudden, his $3.5MM price tag for three more years could be viewed as appealing.

Kulak also warrants a mention.  His possession stats have generally been well above average but that hasn’t resulted in a lot of playing time, including in their playoff run.  But Seattle appears to be a team that is highly invested in analytics and viewed through those stats, he could be more attractive than Chiarot or Edmundson while basically being half the price.

Up front, there are four safe bets to be protected in Gallagher, Anderson, Toffoli, and Kotkaniemi.  Things get a little trickier from there, however. 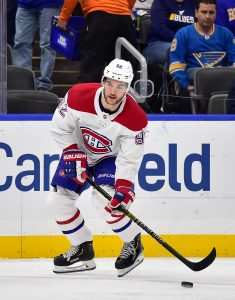 The key to Montreal’s expansion strategy is Drouin.  Heading into the season, the thought of leaving him unprotected would have seemed unrealistic.  However, he struggled to score this season, scoring just twice in 44 games, hardly an ideal output from a $5.5MM contract.  He missed the end of the regular season plus all of the playoffs on a personal leave of absence, one that has yielded more questions than answers.  When will he come back?  Will he come back at all?  If he does, will it be with Montreal or will there be a trade request?  With the uncertainty surrounding his situation, his contract (which has two years left), and his struggles this season, Drouin’s trade value is arguably at an all-time low.  Would Seattle take a swing on the potential upside or would the questions scare them off, making it more beneficial to leave him unprotected?  GM Marc Bergevin will have a few more weeks to try to figure out the answers to those questions.

Evans is another potential wild card.  His NHL experience is relatively limited (just 60 career regular season games) but the 25-year-old did well in limited playoff action and is nearing a return.  He’s also signed for another year at the league minimum.  Center depth among unprotected players around the league may not be the greatest so a cheap youngster could interest Seattle GM Ron Francis.  Montreal might want to protect him but they’re a team that has a lot of unsigned players right now; to meet the requirement of two signed skaters with enough games played, he might have to be made available, especially if they don’t want to take the chance of losing Drouin.

Lehkonen is someone whose regular season potentially had him in that iffy zone of being qualified at $2.2MM with arbitration rights.  He’s undoubtedly a strong defensive forward but aside from his rookie season, he hasn’t been much of a goal scorer (although he did get the series-winner against Vegas) and the open market wasn’t kind to those players in the fall.  He has helped his value to the point where he’s probably protected in a 7/3/1 scheme but he could also be a capable checker for the Kraken if they protect the four defensemen.

There are a few different ways that Francis could go here.  Adding Allen is certainly a safe decision; he isn’t a true number one but can still play 40-45 games and at $2.875MM, he’s on an affordable contract and would be part of the plans beyond 2021-22.  Drouin has the most upside but the highest risk of any of the skaters unprotected.  Lehkonen (who isn’t listed above since he’s a restricted free agent and the above group is only for signed players) would be a viable middle-six forward while Evans and Kulak are more under the radar options but could be picked as well.

For Montreal to switch to a 7/3/1 scheme, they need to get another forward signed.  Giving Perry a new deal and then exposing him with Byron (while protecting Drouin, Lehkonen, and Evans) would meet the exposure requirements but would also run the risk of losing Chiarot or Edmundson.  With the way they’ve played in the playoffs, whichever is left available could very well become the favorite to be selected.  While their mindset is justifiably on the Stanley Cup Final against Tampa Bay, there will need to be some decisions made soon on the expansion front.