When the Chicago Blackhawks acquired Henrik Borgstrom at the trade deadline, he came without a contract. The young forward was playing overseas and it wasn’t clear if the team would be able to convince him to come back to North America right away. Turns out there was nothing to worry about. The Blackhawks have agreed to terms with Borgstrom on a two-year contract, according to Scott Powers of The Athletic. PuckPedia reports that the deal will carry an average annual value of $1MM. 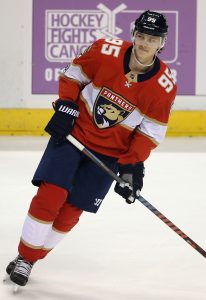 Borgstrom, 23, scored 21 points in 30 games for HIFK this season in Finland, after spending nearly the entire 2019-20 season in the minor leagues. Selected 23rd overall in 2016, it has been a rocky road for Borgstrom since he left the University of Denver. In 58 career NHL games, the rangy center has just 19 points, but could be getting a much bigger opportunity in Chicago next season.

The center depth that the Blackhawks have built is interesting. Jonathan Toews missed the whole season with a mysterious medical issue, and top prospect Kirby Dach was out for most of the year with a wrist injury. That left a huge hole for the team to fill down the middle, giving an opportunity to relatively unknown names like David Kampf and Pius Suter. The former struggled to create any offense, scoring just one goal in 56 games, but Suter took full advantage of the minutes and ended up scoring 14 goals and 27 points. Both are restricted free agents this summer and could be brought back, likely as direct competition with Borgstrom depending on what happens with Toews.

The big question mark is really Dylan Strome, who has one year left on his deal but never did step into that top-line center role this year. The 24-year-old ended up with just nine goals and 17 points in 40 games, a huge drop off from his previous numbers with Chicago. There were even whispers that Strome could be available come deadline time, meaning he is a player to key an eye on as the draft and offseason approach. If the Blackhawks believe Borgstrom can fill a third-line center role, perhaps Strome or others become expendable.