The deadline is now just a few days away and the trade action is heating up. The Chicago Blackhawks have worked out a deal that will bring in Brett Connolly, Henrik Borgstrom, and Riley Stillman from the Florida Panthers. The Blackhawks will also receive a seventh-round pick, while the Panthers get Lucas Carlsson and Lucas Wallmark in return. 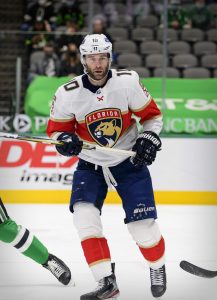 Chicago has been open with their willingness to take on bad money at the deadline, and Connolly would certainly qualify. The 28-year-old forward signed a four-year, $14MM contract with the Panthers in 2019 after his career-best 46-point season in Washington but has been a huge disappointment in 2020-21. Through 21 games, Connolly has just two goals and four points for the contending Panthers and has been pushed out of the lineup by several newcomers. At the end of February, his $3.5MM cap hit even got him through waivers.

It’s not like Connolly has struggled his entire time in Florida. During the 2019-20 season, he recorded 19 goals and 33 points in 69 games but was invisible in the Panthers’ four postseason contests and hasn’t found his game at all this year. A move to Chicago could potentially get him back on track, but for Florida, it is more about getting some salary off the books.

It may feel like Stillman has been around for years, but the young defenseman only turned 23 last month. Selected in the fourth round in 2016, he didn’t even go a full AHL season before making his NHL debut in 2018-19, and now has 43 games under his belt. Still, as a pending restricted free agent that hasn’t been able to establish himself yet, Stillman isn’t a huge prize for the Blackhawks.

The focus for Blackhawks fans should be Borgstrom, who was a first-round pick in 2016 and has 58 games under his belt at the NHL level. While he hasn’t made the immediate impact that some expected after dominating at the University of Denver, the 23-year-old center still has a lot of upside. That potential does come with risk though, as Borgstrom currently isn’t signed to an NHL contract. Instead, he spent this season playing for HIFK in Finland while remaining a restricted free agent here in North America. The Blackhawks would need to sign him to a new contract if he’s to make an impact next season.

Though the Panthers’ goal here was clearing cap space, Carlsson and Wallmark shouldn’t be completely overlooked. The former is a 23-year-old defenseman who has played in 12 games this season for the Blackhawks, and though he doesn’t have a lot of experience, could likely fill the same injury-replacement role that Stillman held.

Wallmark meanwhile is very familiar with the Panthers organization, having spent the end of last season with the team after a trade from Carolina. The 25-year-old forward had two strong seasons with the Hurricanes as a lineup regular, but hadn’t really found his place in Chicago. His $950K contract will expire at the end of this season, leaving Wallmark a restricted free agent. Of course, the Panthers didn’t qualify him last year, which means he might actually be heading for unrestricted free agency once again unless he can impress the front office down the stretch.

Pierre LeBrun of The Athletic was first to break the trade on Twitter.