The St. Louis Blues have agreed to an extension with goaltender Jordan Binnington, signing him to a six-year deal worth a total of $36MM. Binnington was set to become an unrestricted free agent at the end of the season when his current two-year, $8.8MM deal expired. Pierre LeBrun and Jeremy Rutherford of The Athletic provide the full breakdown: 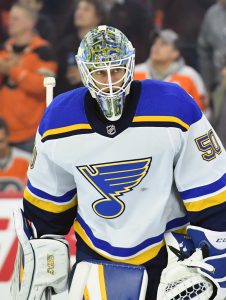 Binnington, 27, was a huge part of the Blues first Stanley Cup in 2019, taking over the crease partway through the season and posting a .927 save percentage as a rookie. That was good enough for second in Calder, fifth in Vezina, and 10th in Hart voting, but his postseason performance was even more spectacular. Binnington started all 26 games the Blues played and stopped 32 of 33 shots in the deciding game seven.

He earned himself that $8.8MM contract with his play in 2019, but this contract comes after another 69 regular season appearances. In those, Binnington has posted a .911 save percentage, not quite up to the level he showed as a rookie. In last year’s postseason bubble he was not good, losing all five games he played with an .851.

It’s those more recent numbers that will raise a few eyebrows among hockey fans, but the Blues obviously believe Binnington can be their starter long-term. A six-year deal will take him through his age-33 season at a hefty cap hit.

This is the same contract that Jacob Markstrom signed in free agency this season, but the Calgary Flames goaltender is several years older than Binnington. There’s no doubt that the St. Louis netminder can provide plenty of excess value on a contract like this, but it also certainly is no guarantee to age well if his game doesn’t improve quickly.

This deal also will impact those to come. Names like Frederik Andersen, Philipp Grubauer, and Petr Mrazek are all unrestricted free agents this offseason and still young enough to land long-term deals like this one.

For St. Louis though, this at least secures the position for the time being. Ville Husso is also signed for next season at a reasonable amount, but the other goaltenders in the system are still very young and unproven. There’s no question now, it’s Binnington’s net in St. Louis.

David Pagnotta of The Fourth Period was first to report the deal.