The Vegas Golden Knights have been riding the hot hand of Marc-Andre Fleury for most of the season, but they actually have another goaltender that was expected to demand the majority of starts. Robin Lehner, who signed a five-year, $25MM contract with the Golden Knights after landing in Vegas last season, has just five appearances because of injury. His last start was over a month ago, but it appears as though his return on the horizon. Lehner has been assigned to the AHL’s Henderson Silver Knights on a conditioning loan, though the release says he will just practice with the team. 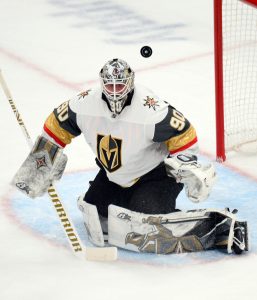 The Golden Knights have also announced that Logan Thompson has been recalled to the team’s active roster and Patrick Brown has been added to the taxi squad. Oscar Dansk and Tyrell Goulbourne have been assigned to the AHL.

Even though Lehner is coming back soon, it doesn’t mean the Golden Knights should move away from Fleury. The 36-year-old is off to the best start of his 17-year career, posting a .943 save percentage through 16 appearances. Four of those have been shutouts to lead the league, one of many categories he is at the top of. Despite being one of the most experienced goaltenders in NHL history—Fleury has played more regular season games than all but just 11 goaltenders—he has only received Vezina Trophy votes on four occasions and never been a finalist. That seems destined to change this season, unless his play falls off dramatically over the next few months.

Lehner meanwhile has received Vezina Trophy votes in each of the last two seasons and was a finalist in 2019 when he won the William M. Jennings with the New York Islanders. Despite a well-traveled career, he has a strong .918 save percentage and was great for Vegas in last year’s playoffs. There’s no question that he deserves some of the starts once he proves healthy enough to rejoin the NHL squad, but how the pie is divided will be a tough task for head coach Pete DeBoer.