While it was relatively quiet on the trade front this past week aside from Colorado adding a bit of goaltending depth, there was still some notable news around the league which receives an extra look in our key stories.

Coyotes Open To Moving Garland: The Coyotes are one of the lower-scoring teams in the NHL and Conor Garland is their leading scorer with 25 points in 30 games.  Despite that, it appears as if Arizona is open to trading the 25-year-old.  The reason would appear to be two-fold.  The first is that he’d yield a good return, especially with a price tag that’s just above the league minimum that even most cap-strapped teams would be able to afford.  The second is that he’s arbitration-eligible for the first time this summer and is poised to land a significant raise.  Arizona’s prospect pool has taken a hit the last couple of years and while they have some veterans that they can move, Garland would undoubtedly allow them to add something of significance to their group.

Krueger Fired: With things going off the rails in Buffalo, it seemed like it was only a matter of time before a coaching change was made.  That time came on Wednesday when the Sabres fired head coach Ralph Krueger along with assistant coach Steve Smith with Don Granato taking over head coaching duties on an interim basis.  Krueger was in his second season with Buffalo but only managed to compile a 36-50-12 record; only six of those wins came in their 29 games this season.  An extensive coaching search is expected as GM Kevyn Adams will now be tasked to find the right person to help lead Buffalo out of what is about to become a decade-long playoff drought. 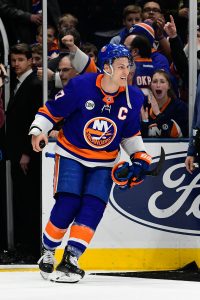 Lee Out For The Year: The Islanders will be without one of their top forwards with the announcement that Anders Lee is out for the year due to ACL surgery.  It’s undoubtedly a big blow to their attack as the captain is tied for the team lead in goals with 12 while he averages over 17 minutes per game.  However, the potential silver lining is that the placement makes him eligible to go on LTIR, thus allowing New York to bring in someone making up to his $7MM AAV in as a replacement.  They will be limited to shopping on the rental market for a replacement but all of a sudden, they become a team to watch for between now and the trade deadline although the opportunity to add comes with a big price in Lee’s absence.

Roy Extension: The Kings have received a strong contribution from Matt Roy over the past couple of seasons and have rewarded him for his efforts, inking the 26-year-old to a three-year, $9.45MM contract extension.  The $3.15MM AAV is a huge jump on the league-minimum $700K he has made over the last two years but in that time, Roy has established himself as a top-four piece on the back end for Los Angeles.  Notably, the contract also buys out two UFA-eligible years which certainly was factored into the price tag.

Surgery For Chiarot: The Canadiens will be without one of their defensemen for a while as Ben Chiarot underwent surgery to repair a broken hand sustained in a fight earlier in the week.  The expected recovery is six-to-eight weeks although GM Marc Bergevin expressed optimism that the veteran will be able to return before the end of the regular season.  Chiarot is in his second year with the Canadiens and had spent most of the season partnered with Shea Weber in their top-four while logging just shy of 22 minutes a night in ice time.  The fact that he’s expected to return will effectively restrict Montreal from going deep into LTIR to try to replace him.