8:00pm: The Canadiens confirmed that Chiarot broke his right hand and will be re-evaluated in the next few days. Because he left (and flew commercial), Chiarot will face at least a seven-day quarantine to return to the Canadiens, but appears to be out much longer than that.

12:30pm: The Montreal Canadiens may have already been looking for some help on defense, but now that need is a little more urgent. The team has announced Ben Chiarot has returned to Montreal for further evaluation on the hand injury he suffered last night. Chiarot left the game against the Vancouver Canadiens after his fight against J.T. Miller and Marc-Andre Perreault of TVA Sports spotted him at the airport with a cast on his hand. 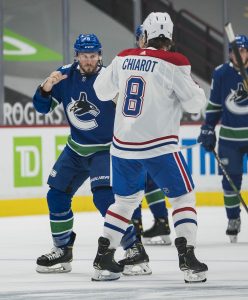 Chiarot, 29, has turned into quite an important figure on the Montreal blueline, averaging over 22 minutes a night before leaving yesterday’s game early. That number trails only Shea Weber and Jeff Petry by less than a minute, showing just how much trust the coaching staff has had in him this season, even through change.

It’s not that the Canadiens don’t have other options, especially if you ask someone like agent Darren Ferris. He made waves earlier this season when client Victor Mete couldn’t get in the lineup, hoping for a fresh start or a chance. Well, that opportunity has certainly presented itself if Chiarot is out for any substantial length of time. Mete has played in just five games and averaged fewer than 15 minutes in those, but was a regular as recently as last season.

Still, if the Canadiens have their eyes set on the postseason, perhaps a deadline addition is in order. The Fourth Period recently reported that Montreal is one of several teams interested in Nashville Predators defenseman Mattias Ekholm, though it would take some salary cap gymnastics to fit him in at his full cap hit. Ekholm will be on the radar of any number of contenders because of his experience and relatively low $3.75MM hit, especially as he comes with another year of control in 2021-22.

Of course, if the Canadiens do decide to add before the deadline, they have the draft picks to do so without touching their NHL roster. Montreal currently holds 14 picks in the 2021 draft, including six in the first three rounds. Perhaps a Chiarot injury would push them in that direction as they currently sit in a playoff spot in the North Division.