At least one player has committed to Columbus. The Blue Jackets have announced a five-year extension for budding star Oliver Bjorkstrand, signing him through the 2025-26 season. Bjorkstrand will earn $2.5MM this season on the final year of a three-year deal signed in 2018, but gets quite the bump in 2021-22. The new deal will carry an average annual value of $5.4MM. Blue Jackets GM Jarmo Kekalainen released a statement on his young forward:

Oliver is a gifted player that has shown steady improvement throughout career to this point and we couldn’t be happier that he will be a Blue Jacket for a very long time. He is a dangerous offensive player, and we believe he will be an even more impactful player for us as he continues to develop and mature in this league. 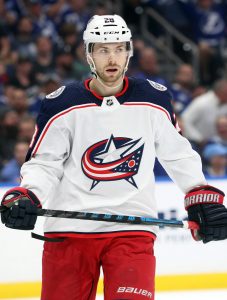 The price goes up each year for Bjorkstrand, as Aaron Portzline of The Athletic reports the full salary breakdown:

The deal buys out four years of unrestricted free agency for Bjorkstrand, who actually made his NHL debut back in the 2015-16 season. While it took him a little while to establish himself, last season was a real breakout with 21 goals and 36 points in just 49 games. It was Bjorkstrand’s second straight 20+ goal season and that increased offense is exactly what the Blue Jackets are buying into with this early extension.

It’s been such a struggle for the Blue Jackets to get players to commit long-term to the franchise, with Pierre-Luc Dubois the latest star player to hint that he wants out. In the wake of that news, the announcement that Bjorkstrand will be staying right through his prime years is nothing but a godsend for Columbus fans. While he may not have quite the same impact as Dubois, there’s a lot to love about the 25-year-old’s game.

Importantly, Columbus is also expected to be without Gustav Nyquist for the majority of the season, meaning Bjorkstrand will be even more important to the attack. He’s been lining up on the team’s first unit at training camp next to Dubois and Alexandre Texier, leading one to believe that the 18-minutes-a-night that he received in 2019-20 isn’t likely to decrease.

For the Blue Jackets financially, this deal is more than acceptable given the amount of money that is set to come off after this season. Brandon Dubinsky, Nick Foligno, Riley Nash, and David Savard are all scheduled to become unrestricted free agents, with depth additions like Mikko Koivu and Mikhail Grigorenko only on one-year deals to begin with. With Bjorkstrand now locked up for a reasonable amount, the team can focus on their other dwindling deals, which include Seth Jones and his 2022 UFA status.