The New York Islanders will not have Johnny Boychuk in the lineup this season, as the veteran defenseman’s playing career has come to an end. Though he is likely not actually retiring thanks to the two years (and $8MM) left on his contract, the serious eye injury that he suffered this season will force him off the ice. 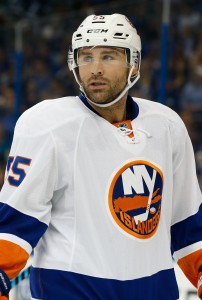 Boychuk was initially injured when Artturi Lehkonen’s skate hit him in a regular season game, creating a frightening scene in New York. Amazingly, the veteran defenseman actually returned for the playoffs but was injured again when he took a high hit from Mike Matheson. In the release, the Islanders state that Boychuk suffered two injuries to the same eye. When speaking to reporters including Arthur Staple of The Athletic, he explained that he has been diagnosed with optic nerve damage.

A veteran of over 800 NHL games, the 36-year-old Boychuk has been a solid contributor for more than a decade. His best offensive season came with the Islanders in 2014-15 when he recorded 35 points, but he was never much of a headline-maker. Instead, he calmly ended rush after rush and moved the puck up to his teammates, averaging more than 20 minutes a night through his long career. He won a Stanley Cup with the Boston Bruins in 2011, playing a pivotal role and even scoring a game-winning goal to eliminate the Philadelphia Flyers in the second round.

Quite importantly, Boychuk does not appear to be giving up the remaining money on his contract, but will be moved to long-term injured reserve if the Islanders need extra cap space. With Mathew Barzal still to sign, suddenly getting a $6MM cap hit off the books is an incredible break for New York, even if it comes at the expense of a savvy veteran defenseman. Boychuk’s career was winding down anyway and the Islanders have more than enough defensemen to fill the roster, meaning this is something of a convenience for the team as they prepare for next season and finish negotiations with Barzal.