The Columbus Blue Jackets will be without one of their consistent offensive pieces for the first part of the 2020-21 season. Gustav Nyquist has undergone surgery to repair a labral tear in his left should and has been given a recovery timeline of five to six months. GM Jarmo Kekalainen explained why the surgery was required at this point:

This was a chronic issue that Gus has been dealing with for a number of seasons. He has been able to perform at a high level, but a cyst in the area developed over time that has inhibited his ability to continue to do so. As a result, surgery was the best course of action and we look forward to having him back at full strength this season. 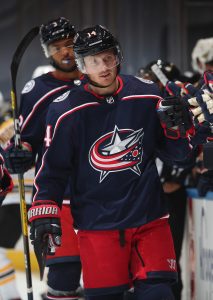 Nyquist, 31, signed a four-year deal with the Blue Jackets in the 2019 offseason and ended up scoring 42 points in 70 games this season. That put him behind only Pierre-Luc Dubois for the team lead, and continued what has been an incredibly consistent pattern throughout his career. Nyquist has played in at least 57 games in each of the last seven seasons, recording at least 40 points in each of them.

Given he’ll be out until at least April, the Blue Jackets will have to find a way to replace some of that offensive. As Aaron Portzline of The Athletic points out on Twitter, there are still several top-six options available on the free agent market, including Mike Hoffman, Erik Haula, Andreas Athanasiou, and Mikael Granlund. Perhaps this injury will push Kekalainen and the Columbus front office toward a deal with one of those names, or perhaps it will only open an opportunity for one of the team’s young players to receive more minutes.

Columbus does have plenty of cap space remaining, though both Dubois and Vladislav Gavrikov remain unsigned.