12:00pm: The Senators have officially announced the contract, signing Galchenyuk to a one-year, $1.05MM contract for the 2020-21 season. Dorion released a statement on the deal:

Alex’s signing represents another good addition for us at forward. He’s versatile in that he can play both left wing and centre. He’s gifted offensively, has been a solid power-play contributor and is a proven goal scorer in this league.

11:07am: The Ottawa Senators are going to add some more offensive firepower to the lineup, as Pierre LeBrun of The Athletic reports they are close to signing unrestricted free agent Alex Galchenyuk. Bruce Garrioch of Postmedia tweets that the contract is expected to carry a salary of $1.05MM. 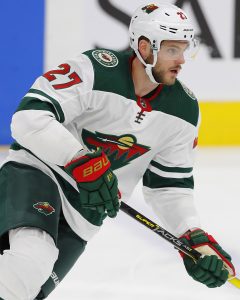 Galchenyuk, 26, is a long way from the 30-goal campaign he had in 2015-16 with the Montreal Canadiens. Since then he’s been included in separate trades for Max Domi, Phil Kessel, and Jason Zucker, bouncing from Montreal to Arizona, Pittsburgh and Minnesota. He was a disaster for the Penguins, scoring just five goals and 17 points in 45 games despite getting an early opportunity beside Evgeni Malkin, and was anything but a dominant presence for the Wild, registering zero points in their four qualification round games.

Still, he’s 26 and was a third-overall pick eight years ago. There is incredible skill in Galchenyuk’s hands and though he has been a relative disappointment given his draft position, he still does have 135 goals and 320 points in 549 regular season games. That’s good enough for second among all players drafted in 2012, behind only Nashville’s Filip Forsberg (166 goals, 353 points).

In Ottawa, he can slide into a lineup that suddenly looks a lot deeper than expected. The Senators have not only added Galchenyuk, but also Evgenii Dadonov and Austin Watson to a forward group that will also likely include third-overall pick Tim Stuetzle. On defense they’ve added Josh Brown and Erik Gudbranson while solidifying the crease with Matt Murray. It’s an impressive offseason for GM Pierre Dorion, who has been adamant that the Senators will be competitive sooner than many believe.

The question now becomes where exactly Galchenyuk plays, given he is likely more effective as a center (even if there are still legitimate questions about his defensive ability). The team already has Chris Tierney, Colin White, Josh Norris, and Logan Brown as potential pivots, meaning someone—perhaps Galchenyuk—will have to move to the wing.

Still, for just over a million dollars, this is an almost risk-free move for Dorion. At worst, Galchenyuk struggles and the team doesn’t retain him next season. At best, he rediscovers his previous 30-goal potential and becomes a core piece in the rebuild. Most likely? Galchenyuk gets strong powerplay time and becomes a trade chip for the Senators at the deadline to add even more assets to the cupboard.