The Montreal Canadiens have acquired another goaltender, nabbing Jake Allen from the St. Louis Blues. Allen comes to Montreal along with a 2022 seventh-round pick, while the Blues will receive a 2020 third-round selection (WSH) and a 2020 seventh-round pick (CHI). The Blues will not retain any of Allen’s $4.35MM cap hit for next season.

For the Blues, a deal like this immediately brings up speculation that the team is trying to clear cap space in order to re-sign Alex Pietrangelo. St. Louis carried nearly $9MM in cap hits from goaltenders this season after signing Jordan Binnington, a number that wasn’t tenable if they wanted to bring their superstar captain back. Pietrangelo is a pending UFA, but the team had already handed much of his $6.5MM salary off in extensions to Justin Faulk and Brayden Schenn. 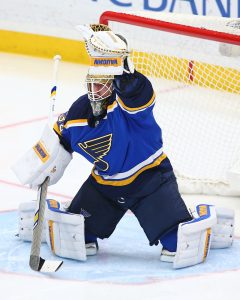 Alternatively, the Canadiens will now have close to $15MM in cap hits from their goaltending tandem given Carey Price’s $10.5MM price tag. That is an incredibly high amount, though getting an experienced backup for Price seemed like a top priority this offseason. The Canadiens have relied so heavily on the star netminder for the last few years that some believe his play was being hindered by overuse—Price led all goaltenders with 58 appearances in the shortened 2019-20 season. A fully rested Price showed in the playoffs exactly why he is still considered one of the best in the game; in ten appearances he recorded a .936 save percentage and helped carry Montreal through the qualification round.

Allen himself experienced a resurgence in 2019-20 after two down years in St. Louis. Playing second fiddle to Binnington, he recorded a .927 save percentage in 24 appearances, the best performance of his career. By the time the playoffs rolled around, he ended up taking over in net and posted a .935 in five appearances.

The Canadiens also have cap space to spare as they rely more and more on their young talent to carry the roster. Max Domi and Victor Mete are the only pending restricted free agents that are set to get substantial raises and at least the former has had some trade speculation surrounding him lately anyway. There will be some bigger deals to be made with names like Brendan Gallagher and Phillip Danault to start the 2021-22 season, but by then Allen’s current cap hit will be off the books.

Perhaps the most interesting part of the deal is that one of the goaltenders expected to be on the market is now gone, meaning teams that are scrambling for a starter this summer will have one fewer to choose from. Allen could have been a replacement in places like Dallas or Edmonton who could see one half of their tandem leave in free agency. The Blues also add a third-round pick as they shed salary, a nice little prize even though it was unlikely Allen could stay.

The Blues will likely hand the crease back to Binnington for next season with Ville Husso a candidate to serve as backup, but it doesn’t come without risk. The 27-year old Binnington could not recapture the magic that helped lead St. Louis to a Stanley Cup in 2019 and recorded just a .912 save percentage in the regular season. His playoff performance was brutal, going 0-5 with an .851 before Allen took over. If he can’t find his game, the Blues may be in trouble next season. With that in mind, St. Louis could be a contender to bring in a more experienced backup this offseason, but they would have to come considerably cheaper than Allen’s current cap hit.