The instant reaction from many fans and media members upon hearing the news this morning that the Toronto Maple Leafs and Pittsburgh Penguins had completed a trade revolving around Kasperi Kapanen was not exactly one of shock. The two teams had both made it clear that changes needed to come after qualification-round exits, though this may have been a little sooner than even most people expected. Kapanen was sent to Pittsburgh for a package that included the Penguins first-round pick this season and prospect Filip Hallander, a deal that earned Toronto GM Kyle Dubas plenty of praise online. 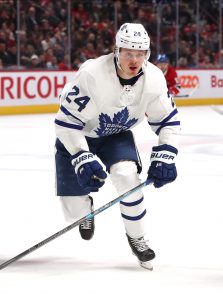 Now that the dust has settled a bit, it’s easy to see why this deal can be regarded as a positive for Toronto. The team is basically recouping an asset that had been lost while gaining some cap flexibility and an interesting prospect to boot. According to Pierre LeBrun of The Athletic, the Maple Leafs had been working the phones hard to try and get a first-round pick for this year—something they’d given away last summer in order to get Patrick Marleau’s contract off the books. LeBrun reports that Dubas and the Maple Leafs front office had spoken with the New Jersey Devils, Nashville Predators, Anaheim Ducks, Minnesota Wild, Chicago Blackhawks and Carolina Hurricanes about Kapanen, trying to get a first-round pick from almost all of them.

The Maple Leafs now sit with the 15th overall pick in a draft that is expected to be deep with NHL talent, especially at the center ice position. That’s a spot where the Toronto pipeline is thin, despite having two bonafide stars in the middle on the NHL roster. Beyond Auston Matthews, John Tavares and Alexander Kerfoot, who currently slots into the third-line center role, there aren’t any obvious choices in the organization that could play top-nine minutes. The team used a mix of Frederik Gauthier, Jason Spezza and Pierre Engvall in the middle during the season but none are exceptional options at this point in their respective careers.

Pittsburgh meanwhile, is going for it once again with Sidney Crosby and Evgeni Malkin another year older. In the press release announcing the trade, Penguins GM Jim Rutherford specifically said that Kapanen could improve the team’s top-six, something that he repeated when speaking to Seth Rorabaugh of the Pittsburgh Tribune-Review:

Rutherford explained that he “wasn’t going to wait” when he learned that Kapanen was available and thinks the speedy forward can be in Pittsburgh “for a long time.” Of note, Kapanen is under contract for two more seasons but will still be a restricted free agent at the end of 2021-22, able to be re-signed to a longer deal.

As for Hallander, the prospect that has Maple Leafs fans excited? Rutherford admitted that the Penguins liked him but didn’t project he could have the same kind of top-six impact. That’s obviously the key to the deal for Pittsburgh as they look to directly surround Crosby and Malkin with talent and push for another Stanley Cup.