June 18: It took more than two months but the deal is now official, as CSKA Moscow announced that Goldobin has indeed inked a two-year contract with the club.

April 11: After spending the majority of this season in the minors, it appears that Canucks winger Nikolay Goldobin is heading overseas.  Sport-Express’ Igor Eronko reports (Twitter link) that Goldobin is expected to sign a two-year deal with CSKA Moscow of the KHL.  TSN 1040’s Rick Dhaliwal relays (via Twitter) a quick statement from Goldobin who confirmed that he is signing in the KHL (but didn’t specify which team) and that he’s looking forward to trying the NHL again at the expiration of his deal. 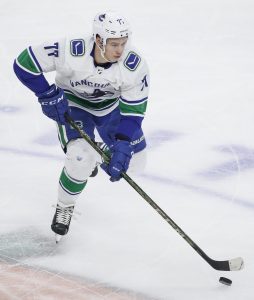 The 24-year-old cleared waivers at the beginning of the season and aside from a single NHL game in late November, Goldobin spent the entire year with AHL Utica.  He was quite productive with the Comets, recording 50 points in 51 games.  It was just a year ago that he spent an entire season with Vancouver as the 2014 first-round pick had 27 points in 63 contests back in 2018-19 but that wasn’t enough to generate any interest on the waiver wire or the trade market.

The Canucks can retain Goldobin’s NHL rights by issuing a qualifying offer.   However, it’s at least worth noting that Goldobin told Dhaliwal that Vancouver had no interest in re-signing him for 2020-21, suggesting that a non-tender was probably coming.  However, as he won’t be eligible for unrestricted free agency at the expiration of his KHL contract, they’re now likely to tender him the qualifying offer now in case he breaks out overseas.  He’ll still count against the 90-player reserve list in that instance but every team is well below that particular threshold.