It’s official now, Buffalo Sabres defenseman Lawrence Pilut has decided to take his talents overseas. The 24-year old has signed a two-year contract with HC Traktor of the KHL, leaving the NHL after parts of two seasons. 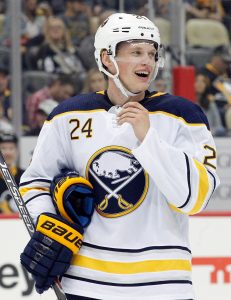 When Pilut was first linked to the KHL last month, the Sabres told John Vogl of The Athletic that there would be an NHL out-clause in the contract that would allow him to return, though it is not clear if that was included.

The Sabres will be able to temporarily retain the restricted free agent’s exclusive rights by extending him a qualifying offer this summer.

Pilut actually appeared to be a potential building block for the Sabres, given how well he had transitioned to the AHL after a breakout season in the SHL. Over 67 minor league contests, the smooth-skating defenseman recorded 49 points, earning himself 46 opportunities in the NHL.

That clearly wasn’t enough for him, or perhaps he is worried about the huge break that will be between seasons for the Sabres. As one of the teams that will not participate in the expanded playoffs this summer, it could be as many as ten months between NHL games for Buffalo.