As things stand, the NHL is planning to have games resume at some point over the coming weeks.  Assuming the regular season continues and play doesn’t jump immediately to the postseason, there will be plenty of things to watch for over the stretch run.  Over the weeks ahead, PHR will examine the top stretch run storylines for each team.  We continue our look at the Pacific Division with Los Angeles.

It is not the best of times in Los Angeles right now.  Last season, both John Stevens and Willie Desjardins weren’t able to lead the team to the postseason.  They brought in Todd McLellan for this season but he hasn’t fared any better aside from the Kings going from last in the division to second last before the stoppage in the schedule.  If there is a stretch run, the focus will be on next season which is where our storylines look.

To say that the Kings have a weakness on the left side of their back end would be putting it lightly.  Any remaining games are going to be chances for veterans like Ben Hutton and Joakim Ryan to make their final push for a contract for next season.  It’s possible that one of them returns but with GM Rob Blake indicating earlier this month that they’re expecting to add on that side before the start of next season, both getting brought back seems less likely.

On top of that, Mikey Anderson will probably be given a chance to stake his case for a full-time spot in 2020-21 as well.  He didn’t look out of place in a six-game stint after the trade deadline that saw him log at least 18 minutes a game in each of those.  Any remaining regular season action would be beneficial from a development perspective at the very least and if he shows that he may be ready for a regular role, it would give Blake a little bit more flexibility heading into the offseason.

It has been a rough couple of seasons when it comes to center Gabriel Vilardi as back injuries have lingered.  He was able to see some regular action with AHL Ontario this season and fared pretty well with 25 points in 32 games in what was basically his first real tour through the minors as a 20-year-old. 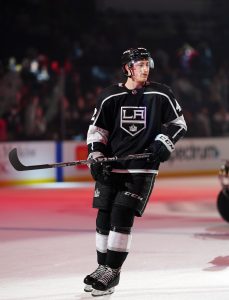 The Kings took notice and brought him up just before the trade deadline and he responded with a goal and an assist in his NHL debut.  Just before the break, he had points in three straight games and sits at seven points in ten contests despite not even averaging 13 minutes per game.

That caution was understandable as this was basically his first extended action in the better part of two years; it made sense to ease him in instead of giving him a big role right away.  But with this extended pause, the time may be right to ramp up his minutes if regular season play resumes.  Yes, the games will largely be meaningless but Vilardi is one of their top prospects and any opportunity to give him NHL minutes is useful.  Seeing him healthy and rested is something they’ve yet to be able to do.  This will be their chance.

The trade of Jack Campbell to Toronto just before the trade deadline paved the way for Calvin Petersen to be promoted to the full-time backup role.  He played well following the recall, posting a 2.64 GAA and a .922 SV% in eight games.  Those numbers were nearly identical to what he put up in an 11-game stint last season (2.61 GAA, .924 SV%).  However, they’re also a lot better than what he accomplished with AHL Ontario over that same stretch so there are certainly question marks about his ability to contribute at the NHL level.

With Jonathan Quick’s play tailing off over the last couple of years, there are viable questions about how much longer he’ll able to hold down the number one job.  At the very least, they need to explore moving closer to a time-sharing situation and the Kings did take a step in that direction this season.  If regular season play returns, this would be a good opportunity to give Petersen some more game action.  Can he play at the level that he has in his brief NHL action or will his performance revert closer to his AHL numbers?  While a few largely meaningless games wouldn’t entirely answer that question, this would be a good time to test him.