While the time for trades has come and gone, there were still quite a few newsworthy stories from around the NHL which are highlighted in the key stories of the week.  (Among the top non-NHL stories was the cancellation of the Women’s World Hockey Championships.)

Metropolitan Injuries: Carolina has been hit hard by injuries on the back end this season.  Already without Dougie Hamilton, they will now be missing Brett Pesce for the rest of the year as he is out four to six months after undergoing shoulder surgery.  To make matters worse, Sami Vatanen, one of their deadline acquisitions, suffered a setback in his recovery and is out indefinitely.  The injuries weren’t just limited to the Hurricanes though as Blue Jackets winger Josh Anderson was also ruled out for the rest of the season after undergoing shoulder surgery that carries a recovery timeline of four to six months.  The speculative trade candidate will become a restricted free agent this summer.

Cap Projections: One of the annual traditions at the GM meetings is a rough projection of next year’s salary cap.  It always tends to be on the optimistic side and this time is no exception.  NHL Deputy Commissioner Bill Daly indicated that the projected range is from $84MM to $88.2MM with the number requiring negotiation with the NHLPA when it comes to their inflator that they can exercise.  Even at the low end, that represents a $2.5MM increase but it probably isn’t realistic to expect much more than that as the higher the Upper Limit is, the more escrow that will be withheld.  In recent years, the NHLPA has used less than the maximum inflator (5%) to try to help curtail that and this will likely be the case again this offseason. 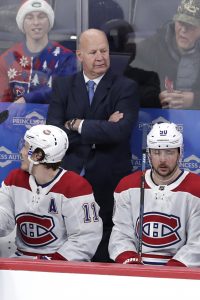 Julien To Stick Around: With the Canadiens set to miss the playoffs for the third straight season and fourth time in five years, some were wondering if Montreal would be making a coaching change.  GM Marc Bergevin quickly put an end to that speculation, announcing that head coach Claude Julien will return for the 2020-21 season.  Julien is in his fourth season with the team (his second stint with the Canadiens overall) and the results have been relatively mediocre overall with Montreal posting a .525 points percentage in that span.  However, he has done enough to earn the continued confidence of Bergevin who will be looking to tweak his roster this summer to help try to get them back into the playoff discussion.

Offside Changes Ahead? The offside rule has come under fire since the institution of the ability to challenge for it on goals.  The current rule is that a players’ skate must be on the line to be deemed onside.  That may soon be changing.  At the GM meetings, they voted to amend the rule to make it that the skate can simply be over the plane of the line to be onside.  That would simplify the review process and would eliminate quite a few of the offside challenges overall.  There are still two more hurdles to clear before it becomes official though as it still has to get through the Competition Committee and be ratified by the Board of Governors in the offseason.

Richard Passes Away: Hall of Fame winger Henri Richard passed away at the age of 84 after a lengthy battle with Alzheimer’s.  He spent his entire 20-year career with Montreal, playing in a franchise record 1,258 games.  His 1,046 points are the third most in team history behind only Guy Lafleur and the late Jean Beliveau.  On top of that, he won an NHL record 11 Stanley Cup titles as a player, a record that is almost assuredly going to stand the test of time.  In 2017, the ‘Pocket Rocket’ was named to the NHL’s All-Time Top 100 players and was one of the most revered players in the history of the Canadiens.