1:15pm: Well that didn’t take long. The Golden Knights have announced a four-year extension for Carrier that will carry an average annual value of $1.4MM.

12:33pm: The Vegas Golden Knights were busy in February adding pieces for a Stanley Cup run, but now that the trade deadline has passed there is work to be done with the rest of the roster. Specifically the restricted free agents, who will need new contracts by the start of next season. Renaud Lavoie of TVA Sports reports that the team is working hard with pending RFA forward William Carrier on an extension. 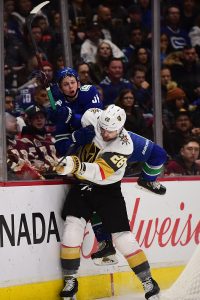 The bang-and-crash winger has found a home with the Golden Knights, using his speed to create havoc in the offensive zone even in limited minutes. Though he still averages fewer than 10 minutes of ice time a night, Carrier has seven goals and 18 points on the season, which actually puts him eighth among Vegas forwards.

Currently in the final season of a two-year, $1.45MM deal, Carrier will be arbitration eligible in the summer but could avoid any nasty hearings by inking an extension in the coming weeks. Though he obviously won’t be demanding top-six money given his role, there’s certainly reason for him to get a slight raise.

One of the most interesting things to watch in Vegas however is how they treat Robin Lehner after acquiring him at the deadline. If the team shows any interest in retaining his services and pairing him with the $7MM/year Marc-Andre Fleury, they won’t have a ton of cap space to spend around the edges of the roster. President George McPhee and GM Kelly McCrimmon haven’t been shy to hand out extensions to rental players they’ve acquired through trade, but there is only so much pie to go around.