With the trade deadline now just a few days away, we will be taking a closer look at the situation for each team over the coming weeks.  Where do they stand, what do they need to do, and what assets do they have to fill those needs?  Next up is a look at the Colorado Avalanche.

The Avalanche have been one of the top-scoring teams in the league all season long which has them comfortably in a playoff spot.  However, a recent rash of injuries has the team on the lookout for some depth at the very least to help get them through the next little while until some of their players come back but GM Joe Sakic could also be setting his sights higher towards adding an impact piece or two as well. 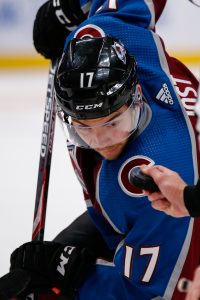 Most teams eyeing contention typically won’t have NHL players available but that might not be the case here.  Winger Vladislav Kamenev is known to be looking for an opportunity to play elsewhere and given that his role is somewhat limited, there’s a good chance that he’ll be involved in a move to bring in someone of significance.  Tyson Jost is also someone to watch.  The tenth pick in 2016 is in his third full professional season but is averaging a career-low 11:52 per game while his offensive numbers aren’t jumping off the charts.  At 21, he’s still young enough to be enticing to several rebuilding teams so expect Sakic to be fielding a lot of inquiries about his availability.

While Sakic has said that his top prospects are all but off-limits, expect defenseman Conor Timmins and winger Martin Kaut to get plenty of attention.  Timmins was a prolific point producer in junior and is catching up after missing all of last season with a concussion.  With 22 points in 33 games in the NHL, he will certainly be on the radar for rebuilding teams.  Kaut recently made his NHL debut and as someone that projects as a safe middle-six forward, he will be coveted as well.

Defenseman Mark Barberio has had a very limited role this season and while they could certainly hold onto him for injury insurance (which is his current role), they could also look to upgrade that spot which would make him expendable.  Kevin Connauton, a veteran of over 300 games, is with their AHL affiliate and could move for similar reasons.  Another blueliner that’s under the radar that could draw some interest is Jacob MacDonald.  The 26-year-old has never played in the NHL but has been a top point producer over the last few years in the minors.  Teams looking to bolster their AHL teams will be interested and with someone as productive as he has been, there could be some that want to give him an NHL look as well.

1) Goalie Depth: The recent injury to Philipp Grubauer has put the spotlight on Pavel Francouz.  He has played well in Grubauer’s absence, earning himself a contract extension in the process but their goalie depth was already relatively thin and is weaker now.  Sakic himself has acknowledged that he would like to add another goaltender as a result.  Someone on an expiring contract is likely given that both Grubauer and Francouz are signed already for next season.

2) Forward Replacements: With Mikko Rantanen, Nazem Kadri, Colin Wilson, and Matt Calvert out of the lineup, that’s four regulars that are missing.  While one or two can be filled from within, the absences for Rantanen and Kadri are much more substantial.  It’s left a pair of vacancies inside their top six and the Avs will certainly want to fill at least one of those from outside the organization.  Come playoff time with a potentially healthier group, an acquisition like that would make an already potent attack even that much stronger.