The Hurricanes have added a core center as they have acquired Vincent Trocheck from the Panthers in exchange for centers Erik Haula and Lucas Wallmark plus prospect defenseman Chase Priskie and center Eetu Luostarinen.

Trocheck looked like he was on his way to stardom two years ago when he put up 75 points in 82 games but his production has tapered off since then.  He had 34 points in 55 games last year and is on a similar pace this season with 36 in 55 contests although his ice time has dipped by nearly three minutes per night. 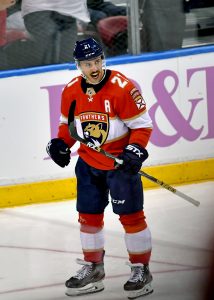 Nonetheless, there is cause for optimism that a change of scenery could help him rebound.  He will be likely slotting in behind Sebastian Aho on their depth chart which will push Jordan Staal into more of a checking role.  Trocheck should be around for a while as he is signed through 2021-22 at a $4.75MM cap hit.  He’ll be eligible for unrestricted free agency in the 2022 offseason.

As for Florida’s return, Haula is also a couple of years removed from a big offensive season that saw him put up 55 points in his first season in Vegas.  However, injuries have limited him since then.  This season, the pending unrestricted free agent has played in 41 games, picking up 11 points and 11 assists.  Haula carries a cap hit of $2.75MM.

Wallmark has emerged as a capable bottom-six player for the Hurricanes over the past two seasons and he has already set a new career-high in goals this season with 11 in 60 games.  The 24-year-old is eligible for restricted free agency this summer with arbitration eligibility and is in line for a nice raise on his current league minimum $700K salary.

Priskie signed with Carolina this summer as a college free agent after not coming to terms with Washington who originally drafted him in the sixth round back in 2016.  He has been productive with AHL Charlotte, collecting 31 points in 56 games but has yet to have a chance to play at the NHL level.  The Panthers don’t have the defensive depth that the Hurricanes do so that opportunity may be coming soon enough.  The 23-year-old has one year left after this one on his entry-level deal with a $925K AAV.

As for Luostarinen, the 2017 second-round pick made his NHL debut with Carolina this season, picking up an assist in eight games.  He has spent the bulk of his first season in North America with the Checkers, picking up 25 points in 44 contests.

Carolina hasn’t shown much interest in rental players in recent years and this trade continues that trend.  In Trocheck, they land someone that they hope can be part of their core and aren’t parting with a top prospect or draft pick to get one.  It will be interesting to see if Florida holds onto all four pieces or if they will be flipping one or more of those in the coming hours.

Sportsnet’s Elliotte Friedman was the first to report the deal.