The Capitals have added some offensive depth for the stretch run as they have acquired winger Ilya Kovalchuk from the Canadiens in exchange for their 2020 third-round pick.  Both teams have confirmed the swap.  The 36-year-old will now be joining his third team of the season.

Kovalchuk started the season with the Kings but some early season struggles led to a long-term stint as a healthy scratch.  Once the remainder of his signing bonus was paid out, the two sides agreed to a mutual contract termination.  However, it took until early January for him to find a new home when he joined Montreal. 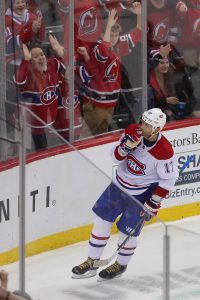 He made an immediate impact with the Canadiens, recording five goals and five assists over his first dozen games with the team.  While he tailed off a bit since then, he leaves them with 13 points over 22 contests which is a pretty good return on a pro-rated league minimum contract of $700K.  TVA Sports’ Renaud Lavoie reports (Twitter link) that Montreal will retain half of that on their books as part of the deal.

While he averaged nearly 19 minutes a night with the Canadiens, his role will likely be much lower with Washington.  Kovalchuk should slot in on their third line and give them another weapon for an already strong power play.  It’s a reasonable price tag to pay for veteran depth while for Montreal, they turn someone they signed for nothing into another draft pick, giving them 13 for the upcoming draft which they will host in June.

Kovalchuk is now on the books for four different teams at the same time which is a first.  He’s on New Jersey’s cap for salary cap recapture from his initial retirement.  He remains on Los Angeles’ books as his contract was a 35+ deal so despite the termination, his full cap hit remains.  Meanwhile, Montreal and Washington are both responsible for a pro-rated $350K from this deal.