The first full week of 2020 is in the books and there were several newsworthy events around the NHL which are highlighted in the key stories of the week.

More Changes In New Jersey: While in-season coaching changes happen with some regularity, GM changes usually occur in the offseason.  That wasn’t the case for New Jersey as they fired GM Ray Shero partway through his fifth year with the team.  The timing is particularly surprising as it comes less than a month after trading away Taylor Hall while he also let John Hynes go as head coach (more on him momentarily).   Tom Fitzgerald will take over as interim GM and will likely be tasked with shepherding the team through the upcoming trade deadline where they will have several veterans that will likely garner interest around the league.

Another Coaching Change: With the Predators underachieving considerably in the first half of the season, GM David Poile decided to make a change behind the bench, relieving Peter Laviolette of his duties as head coach, just days after saying that he wasn’t planning on making a coaching change.  Laviolette spent five and a half seasons in Nashville, compiling a 248-143-60 record while helping lead them to the Presidents’ Trophy in 2017-18 as well as their only Stanley Cup Final appearance the year before.  Poile wasted little time finding a replacement as the next day, John Hynes was hired as their new head coach.  The team picked up their first win under Hines on Thursday and it was quite the memorable one with Pekka Rinne becoming the first goalie to score a goal since Mike Smith did so back in 2013. 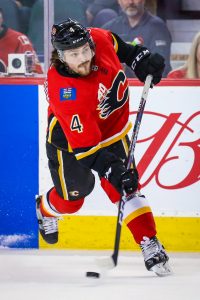 Big Contract For Andersson: Flames defenseman Rasmus Andersson is in his second full NHL season but has emerged as a capable top-four defender on Calgary’s back end.  With fellow blueliners Travis Hamonic and T.J. Brodie both slated to become unrestricted free agents in July, GM Brad Treliving opted to ensure Andersson (who was going to be a restricted free agent) would be sticking around for the long haul, signing him to a six-year, $27.3MM extension.  The deal buys out two years of UFA eligibility and if his offensive game progresses, it could become quite the bargain fairly quickly.  The Flames now have four defensemen under contract for next season (including the injured Juuso Valimaki) so GM Brad Treliving still has some work to do at that position.

Shesterkin Debuts: For years, Rangers goaltender Igor Shesterkin has been viewed as one of the top goaltenders outside the NHL if not the best.  That is no longer the case as the team brought him up from AHL Hartford and had him make his NHL debut.  There aren’t any injuries between the pipes in New York so for the time being at least the Rangers will be going with three goaltenders as Shesterkin joins Henrik Lundqvist and Alexandar Georgiev.  Carrying three goalies is rarely a tenable situation but Shesterkin is the only waiver-exempt option of the three but his deal contains a European Assignment Clause.  Not surprisingly, the Rangers appear to be open to listening to offers for Georgiev, a pending restricted free agent.

Williams Returns: When Justin Williams announced that he was taking a break from hockey at the beginning of training camp, speculation immediately began that he would eventually find his way back to Carolina.  That is indeed what happened as he signed a one-year deal to rejoin the Hurricanes.  The deal is worth the pro-rated league minimum but contains performance bonuses for games played as well as Carolina’s postseason success.  That allows the team to preserve most of their remaining cap room although if they utilize that, they will run the risk of a bonus overage that would roll over into 2020-21.