The first full week of December is in the books and there were a few newsworthy events across the hockey world which are highlighted in the top stories of the week.

New Arena Deal For Calgary: After several years of ups and downs in negotiations, the Flames have a ratified agreement in place for a new arena in Calgary.  The project will cost roughly $565MM to complete with $290MM of that being publicly funded.  Although the financial arrangement is in place, the design still has to be done which has resulted in a rough timeline to begin construction in the fall of 2021 so it will be a while before the team will be finished at the Saddledome.

Stephenson To Vegas: With Carl Hagelin set to return off LTIR, the Capitals were once again about to face a cap crunch.  Rather than shuffle a few pieces on their roster back and forth, they opted instead to trade center Chandler Stephenson to Vegas in exchange for a 2021 fifth-round pick.  While Stephenson’s $1.05MM salary isn’t particularly high, it was a premium that Washington simply couldn’t afford.  The 25-year-old made quite the impression with the Golden Knights as he scored in his first game with his new team. 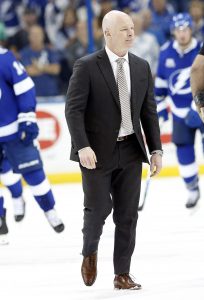 Coaching Change In New Jersey: The Devils were a popular pick to be a big factor in the Metropolitan Division this season but instead, they’ve underachieved considerably.  As a result, GM Ray Shero decided to make a change behind the bench as he fired head coach John Hynes.  Assistant Alain Nasreddine has taken over on an interim basis.  The team went just 9-13-4 under Hynes this season and they haven’t fared much better with their new bench boss just yet as they’ve yet to win in three games since the change.  Hynes’ tenure wraps up with a 150-159-45 record over parts of five seasons.  Former Florida and Toronto head coach Peter Horachek has moved from a scouting role to serve as an assistant on Nasreddine’s staff.

Another Pittsburgh Injury: To say that the Penguins have been hit hard by the injury bug this season would be quite the understatement.  Their lengthy list of injuries has grown as winger Patric Hornqvist will be out longer-term with a lower-body injury less than two weeks after missing time with a different lower-body issue.  Despite missing several key players, Pittsburgh hasn’t missed a beat as they’re one of the top scoring teams in the league.

Stajan Retires: Veteran center Matt Stajan has decided to call it a career at the age of 35.  The 2002 second-round pick carved out a lengthy career for himself, reaching the 1,000 games played mark in his final NHL season back in 2017-18.  Stajan only played for two NHL organizations throughout his career which spanned parts of 15 seasons.  He was with Toronto from 2003 to 2010 before being sent to Calgary in a midseason deal where he spent parts of nine seasons.  He suited up last season with EHC Munich in the German DEL but wasn’t able to attract any NHL interest last summer.