The run of expensive healthy scratches continues in the NHL this season, with the Dallas Stars now getting in on the action. Sean Shapiro of The Athletic reports that the Stars are set to scratch Alexander Radulov for tonight’s game against the Winnipeg Jets, adding that head coach Jim Montgomery said it’s what’s best for the team. Radulov declined to comment. 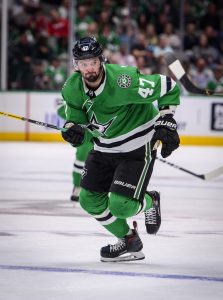 The 33-year old Russian forward has been a disappointment this season after back-to-back 72-point campaigns. Not only is his offensive production down—15 points in 29 games works out to a 42-point full season pace—but he is among the league leaders in minor penalties with 15 already.

Some may see a scratching like this and immediately think about potential trade destinations, but not so fast with Radulov. Not only does he have a full no-movement clause at the moment which he could use to block any deal, but his contract still has two more seasons after this one at a $6.25MM cap hit. Though the actual salary declines in those years, it would be hard for any team to justify acquiring him for the full cap hit with the way he’s played this season.

In the summer of 2017, Radulov turned a strong return to North America with the Montreal Canadiens into a five-year deal with the Stars in free agency. Though the Canadiens were reported to have offered a similar deal, he turned down the team to go play in Texas. Perhaps the Canadiens should be counting their blessings at this point, given their strong cap situation and young core.

While this is probably not the end of Radulov in Dallas, it is a clear message from Montgomery that he will ice the team he believes has the best chance to win on a given night, salary be damned. The Stars turned around a dreadful start with a 14-1-1 run recently, but have now dropped their last four straight and are in need of another shake up.