One of the notable wingers remaining in free agency is now off the market.  The Sabres announced that they have signed Marcus Johansson to a two-year, $9MM contract.  PuckPedia reports (Twitter link) that Johansson will have a ten-team no-trade list.  The deal actually represents a small pay cut as his $4.5MM AAV checks in just below the $4.583MM he had on his previous contract. 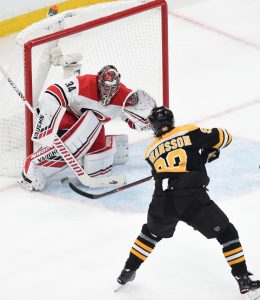 The 28-year-old split the season between the Devils and Bruins and once again had difficulties staying healthy as an upper-body injury with New Jersey and a lung contusion with Boston limited him to just 58 games.  He was relatively productive in those contests, collecting 13 goals and 17 assists.  Johansson was also a useful secondary scorer in the postseason as he picked up four goals and added seven helpers in 22 games as Boston made it all the way to the Stanley Cup Final.  That helped him secure the 13th slot in our Top 50 UFA Rankings.

Buffalo will be hoping that he can be a key secondary scorer for them now.  Johansson will likely slot in on their second or third line while his flexibility to be able to play on both wings is certainly an asset as well.  The Sabres have been active when it comes to wingers this summer as they’ve already locked up Jeff Skinner long-term while adding Jimmy Vesey from the Rangers via trade earlier this month.

This will probably be it for free agent signings for the Sabres, who now have a little over $6.6MM in remaining salary cap space.  However, they still have several restricted free agents in need of new deals, a list highlighted by goalie Linus Ullmark and defenseman Jake McCabe and new contracts for them will take up the rest of their cap room.  However, there has been plenty of trade speculation surrounding blueliner Rasmus Ristolainen in recent weeks and if GM Jason Botterill wants to shake up the roster some more, it’s going to have to come from the trade market.

Sportsnet’s David Amber was the first to report the deal.